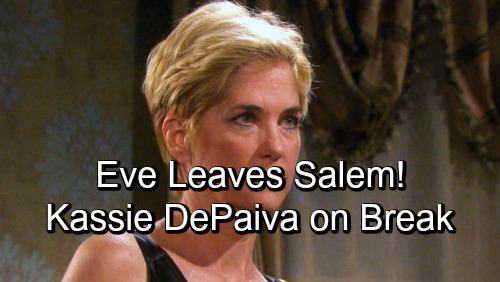 Days of Our Lives (DOOL) spoilers tease that Eve (Kassie DePaiva) will be going away for a while. Eve got herself into real trouble when she interfered in the custody battle between Theresa (Jen Lilley) and Brady (Eric Martsolf). She got Victor (John Aniston) to “help” Brady by planting drugs so it looked like Theresa was using again.

But the plan backfired and Brady ended up losing custody of Tate (Colin & Kyle Schroeder). Brady was devastated by the loss of his son, and then he lost out big when Theresa took Tate out of state for good. But he was absolutely furious when he found that Eve was behind the planted drugs and he blamed Eve for the loss of his son.

Brady promptly left Eve and declared he never wanted to see her again. Eve’s heartbroken, but she’s been hoping to at least be able to talk to Brady. But Brady has been busy seducing and following Kristen (Stacy Haiduk) since he left Eve, and Eve is beside herself with worry.

It looks like soon Eve will realize that it’s really over between herself and Brady. Perhaps she’ll find out that he quickly ran to Kristen’s bed and declare herself done with Brady, or maybe she’ll have another run-in with Brady and he’ll reiterate that the two of them are history.

Whatever happens, Eve is going to decide that enough is enough and that she’s finished with Brady. And Days spoilers say that she’ll decide to leave Salem for a while, too. Kassie DePaiva, who portrays Eve, took a break from filming a while back, so we should expect Eve to be off canvas for a while. Perhaps Eve will feel like she needs to clear her head and get away from all the constant reminders of Brady around Salem.

Will you miss Eve while she’s gone? Stay tuned to DOOL and don’t forget to check CDL often for the latest Days of Our Lives spoilers, updates, and news