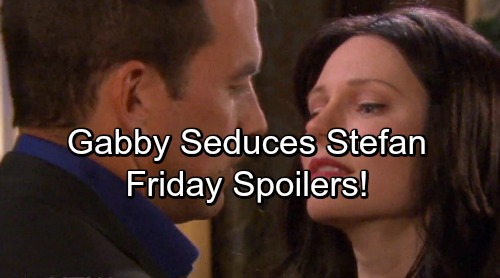 Days of Our Lives (DOOL) spoilers for Friday, February 23, tease that Abigail (Marci Miller) will make some unexpected moves. She just decided it was “time for ‘Gabby’ to come out and play.” Stefan (Tyler Christopher) got another visit from Abigail in her Gabi (Camila Banus) getup. He’ll once again try to get through to her, but “Gabby” will have other ideas.

DOOL fans can expect “Gabigail” to seduce Stefan – or at least try to. She’ll be all over him pretty soon. Days of Our Lives spoilers say Stefan will push “Gabby” away, but she’ll keep at it. Suddenly, there’ll be a knock at the door. Chad (Billy Flynn) just came home, so he’ll be looking for his wife and brother.

Naturally, “Gabby” and Stefan won’t want to be found together. Even though Abigail isn’t quite herself, she believes she has a history with Chad as “Gabby.” Days of Our Lives spoilers reveal that Stefan will have to think fast. He might shove “Gabby” in a closet or something until he can get Chad to leave.

Elsewhere, Hope (Kristian Alfonso) and Rafe (Galen Gering) will continue their wedding prep. Days spoilers state that they’ll be on cloud nine, but a threat is looming. Across town, Claire (Olivia Rose Keegan) will finish the next phase of her plan. She left her phone out to record Tripp (Lucas Adams) and Ciara’s (Victoria Konefal) conversation. Now all that’s left to do is listen. 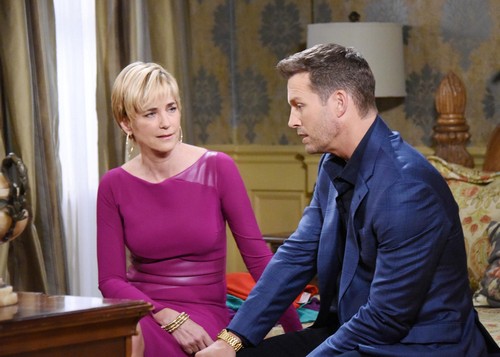 Days spoilers say Claire will play back the recording. She’ll hope that one of her roomies offered some juicy info. Claire’s been trying to find out this secret for quite a while now, but her persistence will finally pay off. She’ll discover that Rafe (Galen Gering) slept with Sami (Alison Sweeney), so she’ll definitely have concerns about him marrying Hope.

At the Kiriakis mansion, Brady (Eric Martsolf) will catch Eve (Kassie DePaiva) off guard. He’ll make a surprising confession, but it won’t involve his deception with Victor (John Aniston). Instead, Brady might admit that he’s falling in love with Eve or something along those lines. He could suggest that she’s made him happier than he’s been in a long time.

Brady may tell himself it’s all part of the game, but it seems his admission will actually be true. That’ll inevitably mess up his plot, so stay tuned for more drama. We’ll give you updates as other DOOL news comes in. Stick with the NBC soap and don’t forget to check CDL often for the latest Days of Our Lives spoilers, updates and news.