BY Heather Hughes on May 31, 2018 | Comments: 2 comments
Related : Days of Our Lives, Soap Opera, Spoiler, Television 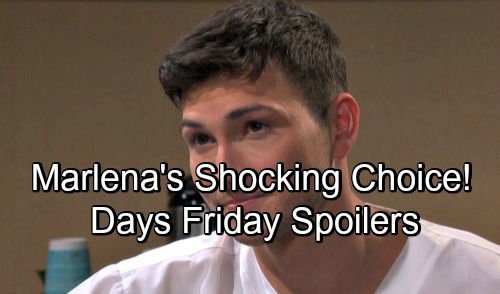 Days of Our Lives (DOOL) spoilers for Friday, June 1, tease that Chloe (Nadia Bjorlin) will blast Theresa (Jen Lilley) for leaving her behind in Mexico. She’ll be appalled that Theresa could just walk away like that. Of course, Theresa will beg Chloe to let her explain. DOOL fans know there’s more to the story, so Theresa will want to share the tricky circumstances and offer a sincere apology.

Chloe won’t think there’s any excuse that could make this acceptable. She’ll fill Brady (Eric Martsolf) in on her version of events, which will enrage him as well. Days spoilers say Theresa will eventually squeeze in a few words. She’ll point out that she was caught by Mateo (Andoni Gracia) and would be dead if Xander (Paul Telfer) hadn’t been there to make a deal. 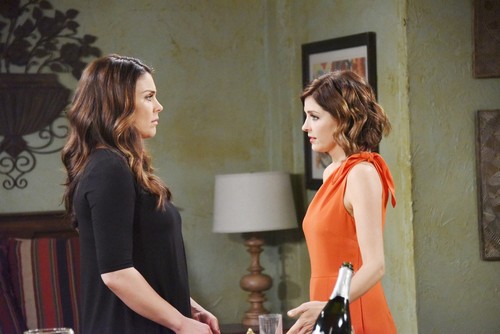 Once Theresa returned home, she couldn’t spill the news about Chloe. Mateo would’ve killed Brady (Eric Martsolf) and Tate (Colin and Kyle Schroeder), so all Theresa’s hard work would’ve been undone. Nevertheless, Brady and Chloe won’t be sympathetic. Theresa will have a tough time redeeming herself, especially when they learn she put John (Drake Hogestyn) and Paul (Christopher Sean) in peril.

Meanwhile, Claire (Olivia Rose Keegan) will make it home from her trip to South Africa. She was hoping to work things out with Theo (Kyler Pettis), but it seems she got dumped instead. Days spoilers say Claire will return with a broken heart. It won’t take long for Claire and Tripp (Lucas Adams) to bond over their romantic woes. 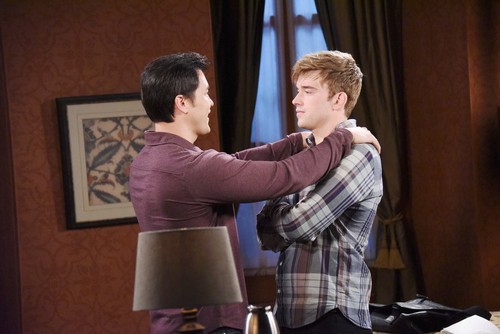 Other Days of Our Lives spoilers say Will (Chandler Massey) and Paul will argue about the future. Will expressed interest in retrieving his memories, but Paul’s not sure that’s a great idea. They’ll bicker about what’s best for Will and their relationship, but this is Will’s decision to make in the end.

Finally, Marlena (Deidre Hall) will arrive at the sanitarium and sit down for a meeting with Ben (Robert Scott Wilson). He’ll insist that he’s sane and poses no danger to others, but Marlena will ask plenty of questions to be certain. After a thorough evaluation, Marlena will greenlight Ben’s release. She’ll warn that Ben had better not make her regret it!

DOOL viewers will be anxious to see Ben head back in Salem next week, June 4-8. We’ll give you updates as other Days of Our Lives details emerge. Stay tuned to the NBC soap and don’t forget to check CDL often for the latest Days of Our Lives spoilers, updates and news.