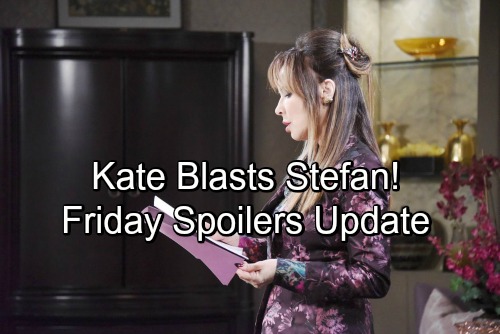 Days of Our Lives (DOOL) spoilers for Friday, June 29, tease that Tate’s (Colin and Kyle Schroeder) custody hearing will kick off. As Brady (Eric Martsolf) and Theresa (Jen Lilley) go to war, Eve (Kassie DePaiva) will be stuck in the middle of the drama. These three will spar for over a week, so DOOL fans won’t want to miss the twists of this case.

In the meantime, Leo (Greg Rikaart) will put his backup plan in motion. Days of Our Lives spoilers say he’ll ask Sonny (Freddie Smith) to marry him, so that should bring a real shock. Sonny will wonder what caused Leo’s sudden attitude shift. He won’t fall for the manipulation and with Will’s help, he’ll plot against Leo next week. Unfortunately, their scheme will take a deadly turn!

Other Days spoilers state that Stefan (Tyler Christopher) will meet with Kate (Lauren Koslow). He just sent the incriminating photos Kayla (Mary Beth Evans) provided, so Kate’s livid. She’ll blast Stefan for coming after her, but he’ll point out that he warned her of trouble. If Kate didn’t want to face Stefan’s wrath, she shouldn’t have shot his mother!

Vivian’s (Louise Sorel) demise certainly set off a terrible chain reaction for Kate. She’s got a target on her back and Stefan has no intention of letting this go. Elsewhere, Paul (Christopher Sean) will declare his love for Will (Chandler Massey). He’ll just want Will to know exactly how he feels. Paul’s terrified of losing him, so he may hope he can strengthen their commitment to each other.

Of course, things should get complicated thanks to Will’s new memory. On Friday, June 29, he’ll recall exchanging love professions with Sonny a few years ago. Days of Our Lives spoilers say Will and Sonny will continue to grow closer, so Paul could become the odd man out. Christopher Sean has left the role, which means we should brace for Paul’s heartache down the road.

It sounds like DOOL has some gripping scenes in store for us. We’ll give you updates as other Days news comes in. Stay tuned to the NBC soap and don’t forget to check CDL often for the latest Days of Our Lives spoilers, updates and news.