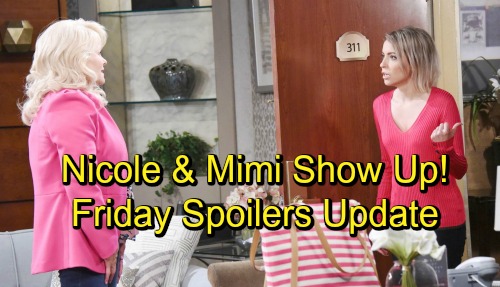 Days of Our Lives (DOOL) spoilers for Friday, October 5, tease that Chad (Billy Flynn) will start to panic. He just found the wig Gabi (Camila Banus) planted, so he’ll freak over the evidence of Abigail’s (Marci Miller) alter. Chad didn’t want to believe this was happening, but he’ll feel like the facts are right in front of him. Of course, that’s all thanks to Gabi’s sneaky plan.

Chad will show Jennifer (Melissa Reeves) his horrifying discovery and ask what she thinks about it. She’ll be deeply concerned when she hears Chad’s suspicions. Days of Our Lives spoilers say they’ll debate their next move. They’ll believe Abigail needs some serious help, so they may ponder the best way to give it to her.

Chad might think committing Abigail seems extreme, but it’s an option they’ll eventually have to consider. Over with Kayla (Mary Beth Evans), she’ll start to worry as well. Days spoilers say Kayla will hear about Abigail’s missing time and wonder if her alters have returned. She’ll want to keep an eye on Abigail, so Gabi will have to step up her game.

Other Days of Our Lives spoilers say Eric (Greg Vaughan) will rush off to find Nicole (Arianne Zucker). It looks like he’ll land at her doorstep by the end of Friday’s episode, so that’ll be a great DOOL cliffhanger. We’ll see Nicole briefly, but the real drama will unfold once Monday rolls around.

For now, let’s talk about Roman (Josh Taylor) and Kate’s (Lauren Koslow) big plot. Days of Our Lives spoilers say they’ll come together for a Stefan (Tyler Christopher) scheme. They’ll team up in hopes of taking the devious DiMera down, but it’s not going to be easy. Stefan’s a crafty character, so Kate and Roman will have to be even craftier.

Finally, Mimi Lockhart (Farah Fath) will make a comeback. She’ll show up to see Bonnie (Judi Evans), so expect some conflict right off the bat. Days fans won’t want to miss all the action ahead. We’ll give you updates as other DOOL news comes in. Stay tuned to the NBC soap and don’t forget to check CDL often for the latest Days of Our Lives spoilers, updates and news.