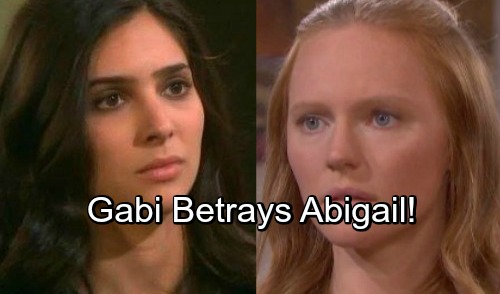 Days of Our Lives (DOOL) spoilers tease that things are going to get complicated for Abigail (Marci Miller). She’s pregnant and is having a secret paternity test run to determine whether Chad (Billy Flynn) or Stefan (Tyler Christopher) is the father. She’s really hoping it won’t be Stefan.

But Days spoilers say that the test results will indeed show that Stefan is the father. That will leave Abigail in a bind and she’ll struggle with the news. The thought of bringing Stefan’s baby into the world will really rattle her, and she’ll consider terminating the pregnancy.

Of course, if that’s the route Abigail wants to go, she’d need to keep both the pregnancy and the termination a secret from everyone, and especially from Stefan. And that won’t be possible, thanks to Gabi (Camila Banus).

Gabi is hell-bent on getting revenge on Abigail, and she’ll use Abigail’s pregnancy to do so. Days spoilers say that Gabi will spill the news of Abigail’s pregnancy to Stefan. She’ll pretend like she accidentally let the news slip, but it will be purposeful. Gabby will know that Stefan knowing about the pregnancy will inflict maximum damage to Abigail.

Once Stefan learns about the pregnancy, he’ll surely put two and two together and figure out that he’s the father. He’ll probably be thrilled to learn that a baby was produced from his time with “Gabby,” and he’ll likely become very protective of the baby. Any chance for Abigail to terminate the pregnancy will essentially be lost.

Well, if Gabi was looking to make Abigail’s life miserable, then she’s found a good way. Chad and Abigail’s lives will never be the same, and Stefan will be a part of their life forever. It’s a pretty effective revenge plan.

Do you think Gabi will stop there? Or does she have more to her revenge plot in store for Abigail? Stay tuned to DOOL and don’t forget to check CDL often for the latest Days of Our Lives spoilers, updates, and news.