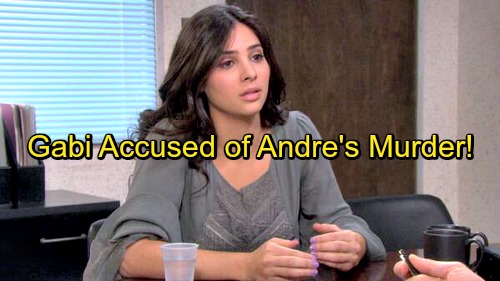 Days of Our Lives (DOOL) spoilers tease that Gabi (Camila Banus) could find herself in serious trouble. DOOL fans can expect several shocking suspects to emerge during the upcoming murder mystery. After Andre (Thaao Penghlis) fires Gabi from DiMera Enterprises on Thursday, she’ll be livid. Gabi will deliver some harsh threats and set herself up as a target of the looming investigation.

Next week, Gabi will go to Stefan (Tyler Christopher) for help. This could involve getting her job back at DiMera, fighting murder accusations or both. The good news is Gabi Chic will likely remain with the corporation. The bad news is Gabi has much bigger problems!

Camila Banus dropped a hint in an Instagram story a few months back. She said something about a police lineup, so maybe a witness will identify Gabi as Andre’s killer. If not, Banus might’ve just meant Gabi would be a top suspect. Days spoilers say Gabi will inevitably land in a tight spot pretty soon.

It seems likely that Gabi will be arrested for Andre’s murder. She may spend some time behind bars thanks to the allegations against her. Gabi already went to prison for killing Nick (Blake Berris), so that’s the last place she wants to end up!

Of course, the Salem P.D. will undoubtedly botch the case. They’re not exactly a competent bunch! Days of Our Lives spoilers state that it’ll take many tries to get the right culprit.

Will Gabi go down for a crime she didn’t commit? Will someone step up to prove her innocence? Those are both great options as this hot Days plot moves along. However, we can’t rule out the idea that Gabi will actually be responsible. Anything can happen as more details come out.

It may be revealed that the person who killed Andre acted in self-defense. He’s keeping his partnership with Vivian (Louise Sorel) a secret, so he might be willing to attack anyone who finds out. That could result in someone using a weapon to fight Andre off.