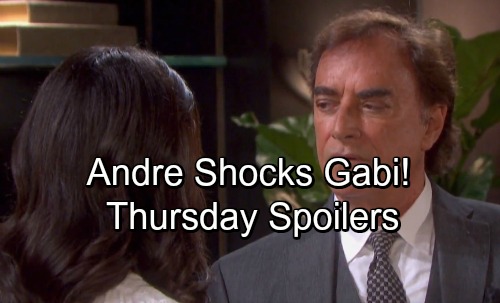 Days of Our Lives (DOOL) spoilers for Thursday, January 18, tease that Stefan (Tyler Christopher) will push Abigail’s (Marci Miller) buttons. He’s constantly getting her riled, but he’s definitely got a thing for her. Vivian’s (Louise Sorel) worried that Stefan’s feelings will derail their scheme, so she’s advised him to back off. Unfortunately, that’s not going to happen.

Stefan’s a guy who does what he wants. He won’t let anyone stand in his way, so Abigail will face more drama. Stefan asked Gabi (Camila Banus) to have dinner with him and go over some documents, but he was obviously hoping Abby would get jealous. Based on Abigail’s reaction, Stefan’s plan seems to be working. He’ll do his best to get under Abby’s skin and keep pulling her in his direction.

Days spoilers say Abigail will find Stefan’s tactics infuriating, but she’ll try to keep her cool. Abby will hint that she doesn’t care how Stefan spends his time. Nevertheless, Stefan will feel like he’s making progress with Abigail. He really needs to focus on someone other than Chad’s (Billy Flynn) wife! 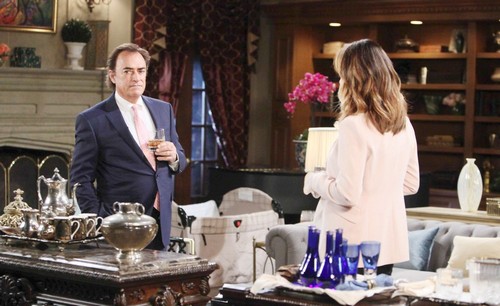 Speaking of Chad, he’ll finish his phone conversation with John (Drake Hogestyn) in Thursday’s DOOL episode. Since Vivian’s eavesdropping nearby, she’ll become quite concerned. Days of Our Lives spoilers say Vivian will fear the jig is almost up. She’ll view Andre (Thaao Penghlis) as a liability, so she’ll want to get rid of him ASAP.

Vivian will suggest murder as an option during her next chat with Stefan. He’ll try to talk her out of it, but there’s no guarantee that she’ll listen. Regardless, Days of Our Lives spoilers say Andre will meet a grisly end soon enough.

Before that stunning moment, Andre will get into a fierce argument with Gabi. He’ll fire her from DiMera Enterprises, so expect the conflict to heat up. Andre will also share some sweet scenes with Kate (Lauren Koslow) on Thursday. He’ll insist that he has more than just growing feelings for her.

Andre will contend that Kate has truly captured his heart. He’ll profess his deep love, but they won’t be able to build a life together. Instead, Andre will finally have to pay the price for all his past transgressions.

DOOL fans will see Andre’s shocking demise on Friday. We’ll give you updates as other Days news comes in. Stick with the NBC soap and don’t forget to check CDL often for the latest Days of Our Lives spoilers, updates and news.