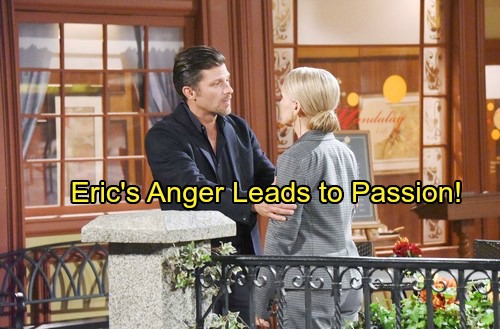 Days of Our Lives (DOOL) spoilers tease that Eric (Greg Vaughan) will feel like he needs to move on. He was extremely jealous when he saw Jennifer (Melissa Reeves) with Dr. Henry Shah (Andre Khabbazi) at the pub. Eric will wallow in his sorrow for a while, but he’ll try to let it go next week, January 22-26. Unfortunately, his attempt to disconnect from his feelings will only lead to anger.

DOOL fans can expect Eric to be in a very foul mood. Meanwhile, Jennifer will wonder what Eric’s deal is. Thanks to Anna (Leann Hunley), Jen’s convinced that Eric’s still longing for Nicole (Arianne Zucker). Now that he’s been acting so envious and irritated, she’ll be perplexed. Jennifer might assume that Eric doesn’t want her, but doesn’t want her with anyone else either.

Naturally, that’s not going to work for Jen. She’ll eventually confront Eric about how he’s behaving. Jennifer may ask if Eric has a problem with dating Henry. Days of Our Lives spoilers say Eric will struggle to hide how he really feels about Jennifer. Roman (Josh Taylor) told Eric that Jennifer was worth fighting for, but he won’t be ready to do that just yet. Eric will try to save himself from pain by lashing out.

Days spoilers say Eric’s cold reaction will irk Jennifer. They’ll eventually get into an explosive argument. Eric will overreact to the situation and blast Jennifer for things he shouldn’t. Jen may hope to figure out what it is that Eric wants from her. Their friendship isn’t going to work if this keeps up.

Jennifer might call Eric out for sending mixed signals, but he may think she’s been doing the same thing. Days of Our Lives spoilers state that their confrontation will get quite heated, but maybe it’s good that they’ll get all this off their chests. If it helps them get their feelings out in the open, that’s all that matters.

On Days, rage often turns to passion in moments like this. Will Eric pull Jennifer into a steamy kiss? Could this lead to a hot night in bed as well? Regardless, Eric and Jen should be moving in the right direction soon enough. We’ll give you updates as other DOOL news comes in. Stay tuned to the NBC soap and don’t forget to check CDL often for the latest Days of Our Lives spoilers, updates and news.