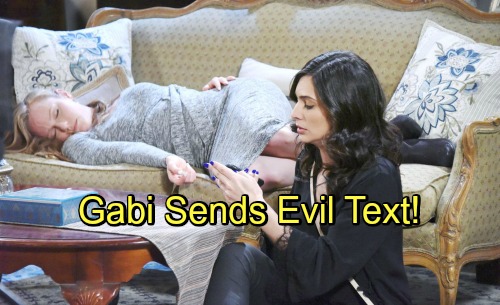 Days of Our Lives (DOOL) spoilers tease that Gabi (Camila Banus) will take her plot to the next level. She’s determined to make Abigail (Marci Miller) and Stefan (Tyler Christopher) pay for the pain they’ve caused. Gabi’s previous tactics weren’t getting her very far, so she recently upped the ante. Sleeping pills will continue to play a crucial part in her scheme.

Gabi mentioned that the drug was safe during pregnancy, so she’s not a total monster. However, Gabi’s revenge is still pretty cruel! Abigail woke up disoriented and couldn’t explain how she got upstairs. Chad (Billy Flynn) seemed more annoyed than concerned, but his worries will really rev up in the coming weeks. Gabi will hope to make Chad think “Gabby” is running amok again.

Of course, Stefan won’t be left out of this twisted plan. Gabi has far more in store for him later, but she can still make him suffer a little now. Days of Our Lives spoilers say Gabi will knock Abigail out again and snatch her phone. She’ll use it to send Stefan an intriguing text and set the stage for more DOOL drama.

It sounds like Gabi will want to get Stefan’s hopes up. Days viewers know Stefan was in love with “Gabby” and wanted a future with her. It was ridiculous for a sane man to believe he could build a life with Abigail’s alter, but his feelings must’ve driven him off the deep end, too.

Stefan has made peace with losing “Gabby,” but Gabi’s cryptic message could change the game. Stefan may think he’s being summoned by “Gabby” for a chat. If he finds Abigail out cold with a wig nearby, Stefan might start pursuing the possibilities again. He could have renewed hope for a life with “Gabby” and their baby.

During the week of October 1-5, Gabi will kick things up a notch. This time she’ll try to reignite the conflict between Stefan and Chad. It shouldn’t be too hard since it never really died down! The only way these brothers can avoid outbursts is to avoid each other. Thanks to Gabi’s manipulation, they should find themselves squaring off once more.

Gabi might make it look like Stefan’s been fooling around with “Gabby” again. Chad could at least assume they’ve been in touch through the bogus texts. Days of Our Lives spoilers say Chad will unleash his wrath, which may only make Stefan more determined to win “Gabby” back.

This mess is getting messier, but that’s just how Gabi wants it! She’ll keep her mission for vengeance going and count on everything to work out. Will JJ (Casey Moss) ultimately get in Gabi’s way? We’ll give you updates as other Days news comes in. Stay tuned to DOOL and don’t forget to check CDL often for the latest Days of Our Lives spoilers, updates and news.