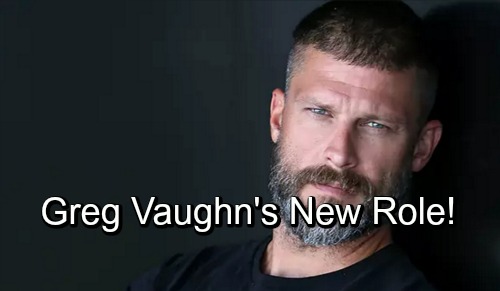 Days of Our Lives (DOOL) spoilers have some exciting news to pass on about a popular Days star. Greg Vaughn, who portrays Eric Brady on the NBC soap, is currently in Toronto filming a new TV movie. The movie is called “A Very Country Christmas 2” and stars Greg in the supporting role of “Billy.”

The movie is a sequel to “A Very Country Christmas,” which was released in 2017 and in which Greg also starred. The original was about a busy single parent named Jeannette who meets a country superstar who has arrived in her small town to escape the intrusive paparazzi and the trappings of fame. They eventually let their guards down and open their hearts to romance.

Greg was in good company in the original movie. Other members of the cast included Bea Santos in the lead role of Jeannette and Greyston Holt in the lead role of Zane. The movie was written by Keith Cooper and Patrick McBrearty and directed by Justin G. Dyck.

Details have yet to be released about the plot for “A Very Country Christmas 2,” but it looks like Greg will reprise his role of Billy. The movie is scheduled to be released later this year on UPtv, just in time for the holidays.

Greg Vaughn has portrayed the role of Eric Brady on Days of Our Lives since 2012, and has also appeared in several TV series, including Queen Sugar, 90210, and Charmed. He also portrayed Lucky Spencer on General Hospital and Diego Guttierez on The Young and the Restless.

Are you excited to see Greg Vaughn in “A Very Country Christmas 2?” Stay tuned to DOOL and don’t forget to check CDL often for the latest Days of Our Lives spoilers, updates, and news.