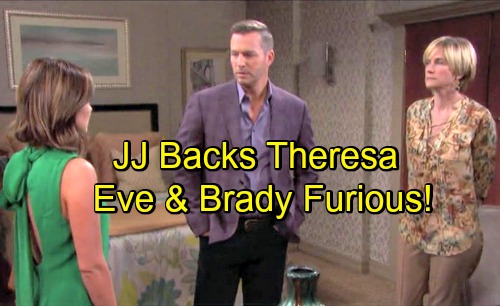 Days of Our Lives (DOOL) spoilers tease that Theresa (Jen Lilley) will fight back in a big way. She’s been doing everything she can to win Brady (Eric Martsolf) over, but he just isn’t willing to budge. Brady insists he’s in love with Eve (Kassie DePaiva), so he just wants Theresa to move on.

However, Brady should be careful what he wishes for. If he thinks clingy Theresa’s a pain, he certainly won’t enjoy a vengeful one. Moving on could mean settling the score! Days of Our Lives spoilers say Theresa will make a bold move next week. She’ll sue for full custody of Tate, so that’ll certainly get Brady riled.

Naturally, Eve will get in on this feud as well. She was essentially filling the mother role before Theresa returned. Eve clearly cares about Tate, so she’ll be furious with her sister. She won’t think Theresa should do this to Brady or little “Tater Tot.”

Of course, Theresa has a right to be in her child’s life. It’s not like she’s been off on some Days parenthood vacation. In fact, Theresa lived as a drug lord’s sex slave to keep Tate alive! You’d better believe Mateo (Andoni Gracia) would’ve pumped bullets in Brady and the kid if she hadn’t.

Alas, Brady and Eve never seem to remember that crucial part of the story. They’ll argue that Theresa shouldn’t yank Tate away from his dad, but the boy obviously wants to spend time with her. He recently asked to see Mommy, but Brady made up excuses to prevent it.

Brady may also object to Theresa’s living arrangements. She’s staying in JJ’s (Casey Moss) studio apartment, so Brady won’t think it’s the ideal situation for Tate. Theresa might fire back that a hotel room isn’t ideal either. Both Brady and Theresa plan to make changes anyway, so they really need to leave location out of this.

Nevertheless, Days of Our Lives spoilers say there’ll be plenty to clash about. Brady, Eve and Theresa will have an explosive showdown, so DOOL fans should see major drama. JJ will eventually intervene and rush to Theresa’s defense. He’ll won’t like how Theresa’s been treated in all of this, so he’ll support her right to see Tate. If suing for full custody is what it takes, then so be it.

It sounds like this war will heat up! Are you on Theresa’s side or are you rooting for Brady? Will the custody battle spiral out of control? We’ll give you updates as other Days news comes in. Stick with DOOL and don’t forget to check CDL often for the latest Days of Our Lives spoilers, updates and news.