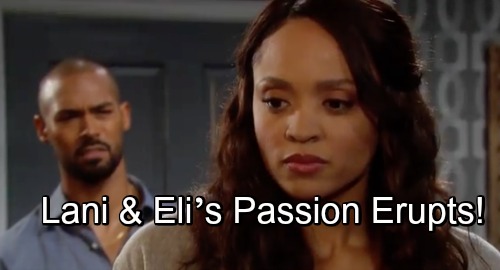 Days of Our Lives (DOOL) spoilers tease that Lani (Sal Stowers) will take the first step toward opening her heart. It’s clear that she’s fallen for Eli (Lamon Archey) and he wants to be with her, too. Lani’s just letting the pain of the past hold her back. Part of her thinks it’d be wrong for the death of their baby to be what brought them together. However, their spark will become impossible to ignore.

DOOL fans can expect jealousy to bubble up thanks to Sheila (Tionne “T-Boz” Watkins). Eli has no romantic interest in his good friend, but that won’t stop her from stirring the pot. Sheila will answer the door wearing only a towel, so Lani will quickly get the wrong idea. Due to Sheila’s misleading comments and her appearance, Lani will assume they’ve been having hot sex sessions.

A towel-wearing Eli won’t correct Sheila, but by then Lani will suspect she’s being messed with. That’ll leave her furious as she heads off to work. Days of Our Lives spoilers say Eli will lecture Sheila about riling Lani. Of course, Sheila will argue that she was just doing a little matchmaking. This is her way of playing Cupid and helping Eli get the woman he wants.

At the police station, Eli will arrive to find Lani fuming. She may be shuffling papers angrily and letting the rage inside build up. Days spoilers say that rage will eventually explode. Eli will wonder what Lani’s problem is. She only wanted friendship, but Eli will think it’s obvious that she wants more. Eli will urge Lani to admit it, but she’ll be hesitant to make that leap.

Days of Our Lives spoilers state that Eli will egg Lani on. He’ll finally declare that he doesn’t have to put up with this. Eli will suggest that he’s got another special someone waiting at home. He won’t mean it, but he’ll hope to get a real reaction out of Lani anyway. It turns out she won’t let him down!

As Eli turns to stomp off, Lani will spin him around and pull him in for a passionate kiss. Their lip lock should please them both and bring some relief. They’ve been dancing around their feelings for far too long.

Will this make Lani see that they’re meant to be together? Will she break down and agree to give dating a shot? Lani and Eli probably won’t be able to resist each other after this steamy smooch, so they should be on the right track soon. We’ll give you updates as other Days news comes in. Stay tuned to DOOL and don’t forget to check CDL often for the latest Days of Our Lives spoilers, updates and news.