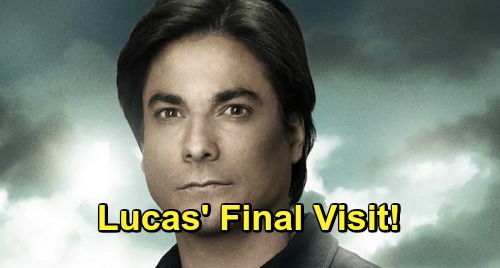 Days of Our Lives (DOOL) spoilers tease that Lucas (Brian Dattilo) will soon announce a major decision regarding his future. He went off to Europe to spend time with his daughter Allie after the whole Baby Bonnie fiasco blew up in his face. Lucas was genuinely devastated to find out that the baby he thought was his actually belonged to Mimi (Farah Fath) and Rex (Kyle Lowder).

It seems that Lucas will have done some soul-searching during his time away in Europe, and his re-connection with Allie will have gone very well. He’ll be back in Salem on Tuesday, December 11, to tell his family and friends that he’s moving permanently to Europe to be with Allie.

After everything that Lucas has been though in recent weeks, this seems like good move for him. He’s not particularly close to his mom Kate (Lauren Koslow), and while he’ll miss his family, he could use a change of scene. It will likely be hard to say goodbye to Will (Chandler Massey), but Lucas has missed a lot of time with Allie and they could stand to catch up.

But the really difficult person for Lucas to leave right now will be Chloe (Nadia Bjorlin). The two have forged a pretty strong relationship over the past several months, and they have a nice bond between them. But Chloe has expressed hesitation in the past about their coupling, and they’re at a place now where they probably need to decide what their future holds.

It looks like Chloe and Lucas will mutually decide to go their separate ways, but it’s going to be on good terms. They’ve had a good run and they’ll probably vow to remain friends and always treasure the time they’ve had together. Days of Our Lives spoilers suggest that Chloe will soon move on with Brady (Eric Martsolf) as Lucas forges his new life in Europe.

Are you sad to see Lucas depart from Days? Stay tuned to DOOL and don’t forget to check CDL often for the latest Days of Our Lives spoilers, updates, and news.