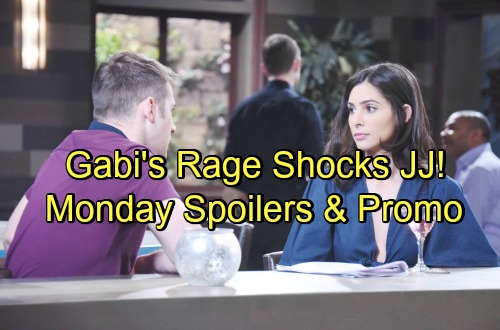 Days of Our Lives (DOOL) spoilers for Monday, July 23, tease that Gabi (Camila Banus) will fume over everything she’s been through. She’s still furious with Stefan (Tyler Christopher) and Abigail (Marci Miller) for setting her up. Gabi went down for a murder she didn’t commit and suffered a horrible beating in prison. Despite Abigail’s DID, Gabi wants her to pay for the nightmare she endured.

Arianna’s (Harper and Sydnee Udell) giving Gabi the cold shoulder, so that’s been hard on this mom. Of course, finding out she couldn’t have more kids was the last straw! Now that her bogus Stefan (Tyler Christopher) baby chaos is exploding, Gabi’s trying to get some satisfaction out of it. Unfortunately, that just won’t be enough. Gabi will seethe as her resentment grows stronger and stronger.

Days of Our Lives spoilers say JJ (Casey Moss) will bump into Gabi and immediately sense that something’s off. Since JJ’s basically the town confidant now, he’ll urge Gabi to open up. Gabi was there for JJ when he was on the verge of committing suicide, so he’ll definitely want to support her. 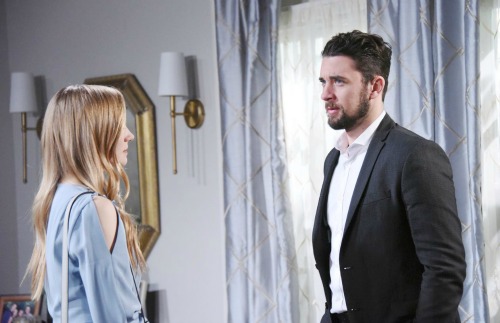 When pressed, Gabi will spill her struggles and vent about how unfair life is. Naturally, Gabi will leave out the part about manipulating Abigail. She won’t want to tip JJ off and blow the plan. Meanwhile, Stefan will make a heartfelt plea at the abortion clinic. After a fierce fight, Stefan will ultimately lower his voice and beg Abby to have his child.

Abigail will change her mind about terminating the pregnancy, but that means she’ll have to share the shocker with Chad (Billy Flynn) soon. That conversation will inevitably bring some difficult DOOL drama. Days of Our Lives spoilers say Chad will be crushed later this week, so stay tuned for some fantastic scenes.

Elsewhere, Jennifer (Melissa Reeves) will put her investigative skills to the test. She’s got a nose for news, so she’ll do her best to solve JJ’s (Casey Moss) mystery. Drugs were planted at his apartment and Jen wants to know who was behind it. Days spoilers say she’ll follow the trail, so she’s sure to stumble across some surprises. It won’t be long until Jennifer figures out Eve’s (Kassie DePaiva) involvement.

In fact, Jennifer could get her first big clue in Monday’s episode. We’ll give you updates as other Days details emerge. Stay tuned to DOOL and don’t forget to check CDL often for the latest Days of Our Lives spoilers, updates and news.