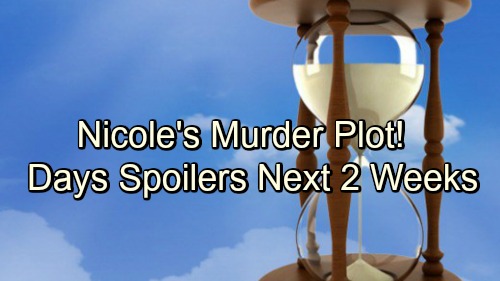 Days of Our Lives (DOOL) spoilers for the next two weeks tease that some warm reunions are coming up. The week of October 8-12 will deliver a happy one for Sami (Alison Sweeney) and Marlena (Deidre Hall). Hattie (Deidre Hall) blamed Sami for the wedding shooting, but Marlena never would’ve held that against her daughter. Sami was too drugged to know what she was doing.

Besides, Sami’s not even the guilty party! Xander (Paul Telfer) will be exposed as the culprit thanks to some security footage. He’ll shake up Nicole (Arianne Zucker) and Eric’s (Greg Vaughan) storyline, too. Days of Our Lives spoilers say Xander will come home to find Eric and Nicole chatting. He’ll explain that he blackmailed Nicole into marrying him as she shows Eric the ring.

When Xander contemplates killing Eric, Nicole will talk him out of it. Later, she’ll share a steamy sex session with Eric and offer a suggestion. Days spoilers say Nicole will want to murder Xander. She’ll think they should join forces to get rid of the monster for good.

Meanwhile, Brady (Eric Martsolf) will gain Kristen’s (Stacy Haiduk) trust by making love to her. He’ll end up following her, so DOOL fans can expect some startling discoveries. Brady will find a mystery patient that he believes is EJ (James Scott). Xander, who has a secret alliance with Kristen, will also meet up with her for a conversation. They’ll want to lock in the next phase of their plan.

The week of October 15-19 will bring Nicole, Eric and Sami together. They’ll determine that they have the same goal, which is probably finding Xander’s hideout. Days of Our Lives spoilers say he’ll be at some warehouse, which probably has EJ inside. Nicole will ultimately be held captive as well, so Sami and Eric will force their way in soon.

Other Days spoilers state that Brady will make an admission. He’ll let Kristen know that he duped her for info, so she’ll immediately hit the roof. Over with Gabi (Camila Banus), she’ll set up a startling scene. Gabi will somehow make it look like Abigail’s become violent. She might injure herself or at least fake it with some makeup.

Whatever the case, Gabi will push Chad (Billy Flynn) to have Abigail committed. She’ll argue that this is proof she needs help. Elsewhere, Belle (Martha Madison) will get stuck in conflict. Mimi (Farah Fath) and Chloe (Nadia Bjorlin) will find themselves at odds, so Belle will do her best to play peacemaker. Rex Brady (Kyle Lowder) will also arrive to get caught in this mess.

Finally, Claire (Olivia Rose Keegan) will have an idea. She’ll approach Ben (Robert Scott Wilson) and suggest that they need to break up “Tiara.” It won’t take Tripp (Lucas Adams) and Ciara (Victoria Konefal) long to find out they’re conspiring, so don’t miss all the drama.

Which bombshells are you looking forward to the most? We’ll give you updates as other Days news comes in. Stay tuned to DOOL and don’t forget to check CDL often for the latest Days of Our Lives spoilers, updates and news.