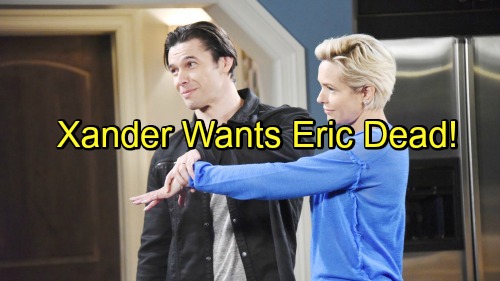 Days of Our Lives (DOOL) spoilers tease that Eric (Greg Vaughan) will face some serious shockers. A lot’s happened to Nicole (Arianne Zucker) since he last saw her. Of course, a lot’s changed for Eric as well. He now knows that Nicole killed Deimos (Vincent Irizarry) and was blackmailed out of town by Brady (Eric Martsolf).

Since Brady won’t stand in their way anymore, Eric’s hoping they can still be together. Unfortunately, a new blackmail scheme will create a snag. Remember how Xander (Paul Telfer) stole Nicole’s recorded confession? He used that to his advantage by forcing Nicole to become his bride.

Eric will be horrified by the news that Nicole’s married to Xander. Life just isn’t fair for these two! Days spoilers say Nicole will assure Eric of her love, but she’ll feel completely stuck. She just won’t see any way out of this mess. Unfortunately, things will get even messier thanks to her evil husband.

Days of Our Lives spoilers say Xander will butt in “Ericole’s” conversation. He’ll have some bombshells of his own to reveal. Xander will admit that he was at John (Drake Hogestyn) and Marlena’s (Deidre Hall) wedding. He was the mystery shooter, so Eric will be furious that Xander pumped a bullet in his mom.

DOOL will expose a partnership between Xander and Kristen this week. They’ve joined forces, but Xander always puts his own agenda first. He’ll explain that Eric was his intended target, but he apparently missed.

Of course, that was probably for the best if Xander was trying to go rogue! Kristen wouldn’t mind if Eric died, but Marlena has been her focus during this stint. If Kristen ordered Xander to shoot Marlena, she undoubtedly expected him to get the job done.

Then again, there’s a chance Xander and Kristen’s alliance came afterward. She might’ve realized he was involved and suggested that they could help each other out. Regardless, it’s clear that Xander will be full of rage. He’ll be downright nasty to Eric, which will leave Nicole just as riled.

Xander will make another murder attempt while Eric’s in the room with him. Thankfully, Nicole will intervene and talk her hubby down. She’ll convince Xander to let Eric go, but this isn’t over. Days of Our Lives spoilers say more Xander mayhem’s on the way, so stay tuned.

Are you ready to see what else is in store for Xander, Eric and Nicole? We’ll give you updates as other Days details emerge. Stick with DOOL and don’t forget to check CDL often for the latest Days of Our Lives spoilers, updates and news.