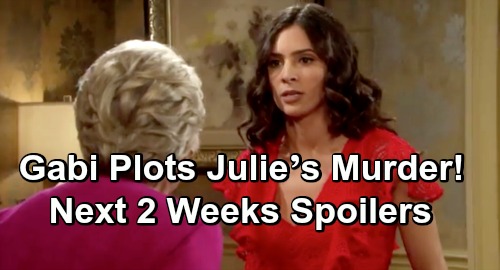 Days of Our Lives (DOOL) spoilers for the next two weeks tease that some bombs are about to drop in Salem. During the week of December 10-14, Chloe (Nadia Bjorlin) will get some shocking news. After Justin (Wally Kurth) delivers a letter, Chloe will open it up and realize she has a chance to be Holly’s mom again. Nicole’s (Arianne Zucker) wishes will be clearly spelled out in writing.

Naturally, Nicole decided on this long before Eric (Greg Vaughan) showed up to save her from Xander (Paul Telfer). Just before the explosion, Nicole pushed Eric to look after Holly. He was the one she wanted as Holly’s guardian in the end. When Eric hears about the letter, he’ll be stunned and devastated. Eric will work hard to talk Chloe out of pursuing custody, but she’ll be hard to convince.

Brady (Eric Martsolf) will take Chloe’s side, which isn’t surprising since he recently had a brawl with Eric at the pub. This brother war will continue to heat up! Over with Lucas (Bryan Dattilo), he’ll tell all his loved ones goodbye and leave for Italy. Days of Our Lives spoilers say Lucas will jet off to be with Allie, so don’t miss this week’s farewell.

Later, Abigail (Kate Mansi) will sneak in Kayla’s (Mary Beth Evans) office. She’ll be looking for any evidence that could point to Gabi’s (Camila Banus) lies. However, it’ll be Julie (Susan Seaforth Hayes) who really makes progress. While searching through Gabi’s bedroom, Julie will uncover the correct paternity results. She’ll be ready to spread the word, but Gabi will have other ideas.

During the week of December 17-21, Julie will be injured in a terrible staircase tumble. It sounds like Gabi will push Julie in hopes of keeping her secret. Days of Our Lives spoilers say Julie’s friends and family members will fear the worst. They’ll rally around her at the hospital and pray for a miracle.

Unfortunately, Gabi’s turned into a real monster who’s capable of anything. She’ll resolve to do something drastic and count on it silencing Julie forever. Will Gabi sneak in Julie’s hospital room and turn off her life support? Will she try to inject Julie with something that could kill her quickly? There are some good options here, but none of them will work. Julie will live to tell her tale, so stay tuned.

Other Days of Our Lives spoilers say JJ (Casey Moss) will leap into action. He’ll save the life of a nurse named Haley (Thia Megia), so this will be DOOL’s way of kicking off their romance. Across town, Abigail will plan to divorce Stefan (Tyler Christopher) and finally be rid of her nightmare. Once she’s confident that she can expose Gabi’s deception, Stefan should be dealt a difficult blow.

Elsewhere, there’ll be trouble for the newlyweds. After marrying Leo (Greg Rikaart) the week before, seething Sonny (Freddie Smith) will keep his new husband at a distance. Of course, that won’t stop Leo from climbing in Sonny’s bed and trying to make this more than a simple arrangement!

It looks like some great scenes are coming up on the NBC soap. We’ll give you updates as other Days details emerge. Stick with DOOL and don’t forget to check CDL often for the latest Days of Our Lives spoilers, updates and news.