Days of Our Lives Spoilers Next 2 Weeks: Kate Holds Ted at Gunpoint – Paul Accuses Will of Cheating – Gabi Stirs the Chabby Pot 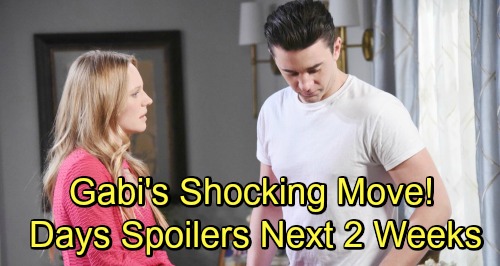 Days of Our Lives (DOOL) spoilers for the next two weeks tease that several Salemites will be torn. For starters, the week of August 6-10 will leave Ciara (Victoria Konefal) stuck between Tripp (Lucas Adams) and Ben (Robert Scott Wilson). She sees positive qualities in both guys, but this love triangle is already incredibly complicated.

Tripp is kind and would earn the seal of approval from Hope (Kristian Alfonso), so he’s got at least two things going for him. Since Ciara’s finally moving past Tripp’s near-sex blunder with Claire (Olivia Rose Keegan), it’ll make it easier for her to get close to him. Days spoilers hint that Ciara and Tripp may have sex, which is proof that she feels safe and loved.

However, Ciara just won’t be able to get Ben (Robert Scott Wilson) out of her head. She’ll literally run into him in the town square and sparks will fly. They’ll end up on the ground inches away from each other, so Ciara will struggle with temptation. To make matters worse, Hope will try to drive Ben out of town this week. DOOL spoilers say she’ll do everything she can to get rid of him.

Elsewhere, John’s (Drake Hogestyn) move will leave Marlena (Deidre Hall) filled with dread. He’ll see “Doc” in her wedding dress by mistake, so Marlena will fear wedding day trouble. The week of August 13-17 will deliver even more drama. Paul (Christopher Sean) will catch Will (Chandler Massey) in a dangerous lie, so he’ll call him out on it.

Days of Our Lives spoilers say Paul will eventually make some startling accusations. He’ll think Will’s cheating been with Sonny (Freddie Smith) behind his back, but they’re just trying to deal with Ted’s (Gilles Marini) blackmail. Speaking of that blackmail, Will’s going to expose the plot to Kate (Lauren Koslow) soon. She’ll blow her top and ultimately point a gun straight at Ted!

Other Days spoilers say Steve (Stephen Nichols) will do some snooping. He’ll crack the code to Kayla’s (Mary Beth Evans) phone and start looking through her messages. Steve will think this is the best strategy to find out Kayla’s secret, but he’ll be sinking awfully low!

Over with Abigail (Marci Miller), she’ll catch Chad (Billy Flynn) and Gabi (Camila Banus) growing closer. Their warm moment will leave Abigail full of jealousy and fear. At the loft, Ciara will drop a roommate bomb on Tripp and Claire. She’ll announce that Ben is moving in, but that news will infuriate Tripp.

You can bet Hope will throw a fit as well. She’ll be livid that Ben’s still hanging around Ciara in Salem. Days of Our Lives spoilers state that Ben isn’t going anywhere, so all these bitter battles will rage on. We’ll give you updates as other DOOL details emerge. Stay tuned to the NBC soap and don’t forget to check CDL often for the latest Days of Our Lives spoilers, updates and news.