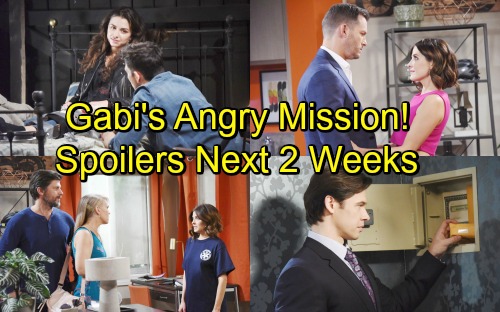 Days of Our Lives (DOOL) spoilers for next two weeks tease that we’ll see some Salem shockers. The week of June 11-15 will bring the claws out for Eve (Kassie DePaiva) and Theresa (Jen Lilley). With Victor’s (John Aniston) help, Theresa will find a way to gain the upper hand. She’ll stun Brady (Eric Martsolf) and Eve when she drops her next bomb.

Theresa will insist that she’s in charge of Bella now. Naturally, Eve will blow her top. She teamed up with Brady and put a lot of hard work in this magazine. Eve won’t see why Theresa should be able to swoop in and take over. However, Theresa will suggest that she’d be more than willing to step aside. She would just need a “Thrady” reunion in return!

Brady will also be named head of Titan if he gives Theresa what she wants. He’ll consider getting back together with her, but Eve’s surprising move will thwart her sister’s plot. Meanwhile, Days of Our Lives spoilers say Ciara (Victoria Konefal) will freak over her rescuer. She’ll wake up in a cabin with Ben (Robert Scott Wilson) and completely lose it.

Ciara’s leg will be broken, so there’ll be no escaping Ben’s grasp. Fortunately, DOOL fans know Ben’s turning his life around. He’ll assure Ciara that he’s changed and offer the medical attention she needs. Over with Will (Chandler Massey), he’ll get injected with Dr. Rolf’s (William Utay) serum and play the waiting game. During the week of June 18-22, the serum will finally bring some memory flashes.

Other Days spoilers say JJ (Casey Moss) will leap into action when Lani (Sal Stowers) has a baby crisis. His EMT training will be put to good use! Later, Lani will have an emergency C-section. Eli (Lamon Archey) will gather with some family members to await word on the fate of Lani and his child.

Over with Hope (Kristian Alfonso), she’ll be discouraged after her hunt for Ciara stalls. Days spoilers say she’ll lash out at Tripp, but a sudden call will soon bring relief. Ciara will phone her mom to let her know she’s OK. When Hope asks where she’s at, Ciara will admit Ben’s been taking care of her. That news will fill Hope’s heart with dread. She’ll hope Ciara can take care of herself with the killer.

Finally, Days of Our Lives spoilers state that Gabi (Camila Banus) will score her release from prison. She’ll be excited to see Arianna (Harper and Sydnee Udell), but Ari may not reciprocate. Perhaps she’ll be upset that her mom left her for so long.

Whatever the case, this reunion won’t go according to plan. We’ll give you updates as other DOOL details emerge. Stay tuned to the NBC soap and don’t forget to check CDL often for the latest Days of Our Lives spoilers, updates and news.