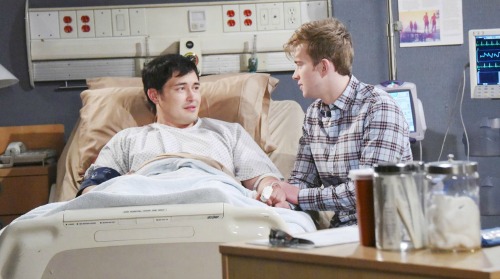 Days of Our Lives (DOOL) spoilers tease that Paul (Christopher Sean) has a long road ahead of him. He’s already begun a grueling course of physical therapy for his spinal injury, and he’ll be confined to a wheelchair indefinitely. But he’s got a lot of support from his family, and from Will (Chandler Massey) especially.

What Paul doesn’t know is that when Will’s memories recently came flooding back, so did his desire to re-engage with Sonny (Freddie Smith). “WilSon” was immediately back on, and Will and Sonny professed their deep love for each other and desire to be together. But due to Paul’s accident and resulting paralysis, Will and Sonny decided that Will would go back to Paul.

The only problem with this scenario for Will and Sonny is that Paul’s a perceptive guy, and he’s already a bit unsure about Will’s commitment to him. The last thing that Paul wants is for Will to stay with him out of pity or obligation because of his paralysis. Paul’s a private detective, and he can easily sense when someone’s lying or holding something back.

Paul’s already skeptical about everything being “fine” between himself and Will. But soon, he’s going to get an earful of a conversation that will really get him worried. Days spoilers say that Paul will overhear Will talking to Sonny on the phone. Of course, he’ll only hear Will’s side of the conversation, but it will be pretty unsettling.

Chances are, it will be an intimate-sounding conversation. Will and Sonny are pretty careful, so they probably won’t say blatant “I love yous” or anything like that, but the nature of the conversation will be enough to get Paul really worried. Paul will probably go back and forth between thinking he’s being paranoid and thinking that Will might really want to be with Sonny.

How will Paul handle this situation? Will he confront Will about what he heard? Or will he decide to do some sleuthing behind the scenes to discover whether Will has real, active feelings for Sonny? Stay tuned to DOOL and don’t forget to check CDL often for the latest Days of Our Lives spoilers, updates, and news.