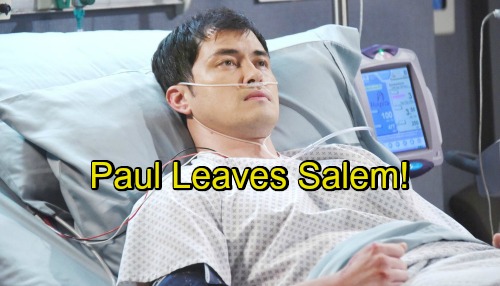 Days of Our Lives (DOOL) spoilers tease that more drama’s looming for Paul (Christopher Sean), Will (Chandler Massey) and Sonny (Freddie Smith). Once Will got his memories back, he was ready to dump Paul within a day or two. Many DOOL fans thought we’d see Will wrestle with which love to choose. It would’ve made sense for Will to be torn, but maybe they had to rush this story along for Paul’s exit.

Speaking of that exit, it’s already in motion. That’s clearly what this paralysis plot’s all about. Still, there are some great moments left to play out in this storyline. Paul will remain on air for a while longer, so Days of Our Lives viewers should hang tight and enjoy the ride.

Will’s decided to stick with Paul and support him as he adjusts to a new normal. That means Will’s inevitably going to pine for Sonny. There’s a good chance Paul will pick up on the looks of longing and sexual tension. Will may even be tempted to cheat on Paul with their mutual ex.

However, Days of Our Lives spoilers hint that Will and Paul may part ways on good terms. That makes it seem like Will’s going to stay strong and loyal. It’s a great plan if they want to show growth in Will’s character. Plus, this setup would allow Paul to make a huge sacrifice. He could leave as a hero instead of in a huff.

At some point, Paul may realize he’s not who Will wants. He may even realize it right now, but he’s too scared to push Will away. Paul needs Will in his corner more than ever! Nevertheless, Paul’s the kind of guy who can bounce back. He’ll inevitably deal with his diagnosis and keep moving forward.

Once Paul’s faced the facts, he may step aside for “WilSon.” That could be part one of Paul’s upcoming departure. Of course, he’ll probably undergo some experimental treatment as well. Theo’s (Kyler Pettis) part of some medical trial in South Africa, so perhaps Paul could join that or another program that offers hope.

It’ll be tough to say goodbye to Paul, but who knows what the future holds? Christopher Sean could reprise his role one day or Days could bring in a recast. In the meantime, Will and Sonny fans will get the reunion they’ve been waiting for. We’ll give you updates as other Days news comes in. Stick with DOOL and don’t forget to check CDL often for the latest Days of Our Lives spoilers, updates and news.