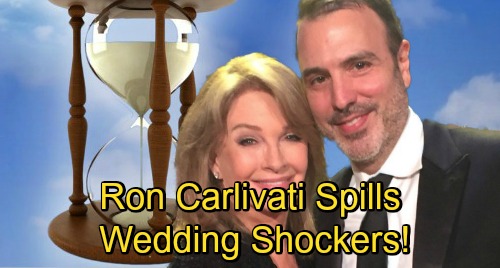 Days of Our Lives (DOOL) spoilers tease that some crazy DOOL wedding drama’s on the way. John (Drake Hogestyn) and Marlena’s (Deidre Hall) nuptials will be anything but ordinary! They’ll face a series of shockers as they build up to the biggest (and most dangerous) one of all.

Ron Carlivati, Days’ head writer, previewed what’s to come in an interview with Soap Opera Digest. He’s excited about this can’t-miss event. Before the wedding kicks off, Susan (Stacy Haiduk) will show up in Salem. She’ll crash Marlena’s bachelorette party and bring a little chaos to those around her.

“It’s such a fun character, and I had an important story reason for her to be in town,” Carlivati said. He discussed Susan’s breakdown at the end of her last run and argued that she needed to find peace.

Carlivati felt that “she would want to come and make amends and be part of this celebration.” Since Susan has a colorful history with John and Marlena, Carlivati thought it was crucial to include her.

Of course, Susan will also reach out to Will (Chandler Massey). Days of Our Lives will take full advantage of her time on canvas.

Next, Carlivati brought up the topic of Kristen (Stacy Haiduk). “I have to say that it is very likely and possible that Kristen might make an appearance,” Carlivati teased. He wouldn’t confirm that she physically comes to Salem, but she’ll be addressed at the wedding.

It’s possible we’ll see Kristen somewhere else while her handiwork plays out at the nuptials. That’s where Sami (Alison Sweeney) could come in. Days of Our Lives spoilers say Sami will make quite a splash after the ceremony begins.

She’ll burst through the door covered in dirt and leaves, so something’s up here. Sami will also seem awfully drunk, which will further perplex the crowd.

Days spoilers state that Sami will rant about how she can’t let her do this. The guests will most assume she means letting Marlena marry John, who will be pretty irritated with Sami for ruining things.

Sami will eventually whip out a gun and take aim. Will she be under mind control or perhaps drugged by Kristen? Sami can be out of control sometimes, but this is certainly extreme – even for her!

Word has it Sami will try to shoot at someone else and mistakenly shoot Marlena. Then again, she could do it on purpose if she’s been brainwashed to. Carlivati warned, “Danger is hanging over the entire wedding.”

It sounds like the “Jarlena” nuptials will come with some mysteries and mayhem. We’ll give you updates as other Days news comes in. Stay tuned to DOOL and don’t forget to check CDL often for the latest Days of Our Lives spoilers, updates and news.