BY hellodrdavis on December 10, 2018 | Comments: one comment
Related : Days of Our Lives, Soap Opera, Spoiler, Television 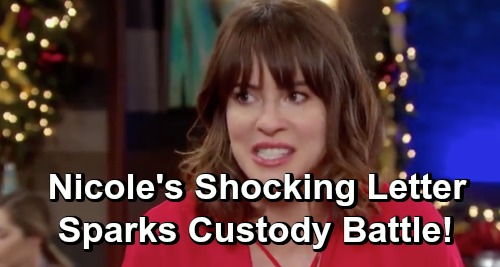 Days of Our Lives (DOOL) spoilers tease that Sarah (Linsey Godfrey) and Chloe (Nadia Bjorlin) are headed for a fierce argument. The two ladies don’t know each other very well, but they’re about to get off to a bad start, and it will all have to do with Eric (Greg Vaughan) and his desire to raise Nicole’s (Arianne Zucker) daughter Holly (Harlow and Scarlett Mallory).

Sarah has found herself very protective of both Eric and Holly lately. Sarah was friends with Nicole and has always had a soft spot for Holly. And she believes that Nicole’s final wish – that Eric should raise Holly – should be honored. She sees nothing but good in Eric and has witnessed firsthand the bond between him and Holly.

But Chloe will soon have a radically different perspective. According to Days spoilers, Justin (Wally Kurth) will deliver a letter from Nicole’s estate to Chloe, and it will concern Holly. In the letter, Nicole will ask that Chloe become Holly’s legal guardian. Of course, this letter will have been written before Nicole and Eric got back together before Nicole’s death.

Chloe will take this letter seriously, and she’ll maintain that she should be the one to raise Holly. Brady (Eric Martsolf) will back her up on this, and she’ll have the law on her side. After all, she’s got a letter from Nicole herself stating her wishes.

Sarah will plan to persuade Chloe to allow Eric to raise Holly, hoping that she can reason with Chloe. But things won’t go exactly well. Chloe feels a strong bond to Holly, since she was the surrogate who carried Holly to term. She’ll point to Nicole’s letter as proof that she is the right person to raise Holly.

It doesn’t look like anything will get resolved during their argument, and angry words will be exchanged. And if anything, their argument will polarize each of them even more and create bad blood between them. It looks like it will be the beginning of a long fight over Holly’s guardianship.

Who do you think should raise Holly? Stay tuned to DOOL and don’t forget to check CDL often for the latest Days of Our Lives spoilers, updates, and news.