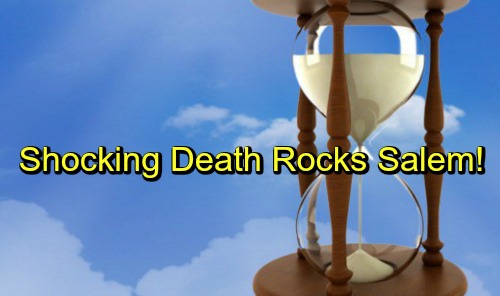 Days of Our Lives (DOOL) spoilers tease that some deadly drama could be looming. In a recent issue of Soap Opera Digest, a blind item pointed to a well-liked character being killed off. There are a few options on other soaps, but there are certainly some possibilities on Days as well. We should at least consider the idea that DOOL will let a popular character bite the dust.

Let’s look at the facts and try to determine who might face a grim fate. For starters, there’s Nicole (Arianne Zucker). We know she won’t be sticking around long, so some Days fans fear the worst. It’d be a shame for DOOL to bring her back just to kill her off, but stranger things have happened in the soap world.

After all, the show will need a way to wiggle out of “Ericole’s” future together. Next week, Days of Our Lives spoilers say they’ll prepare to live happily ever after. Eric (Greg Vaughan) will plan to help Nicole kill Xander (Paul Telfer) and put this mess behind them.

That plan will go awry after Xander kidnaps Nicole. Luckily, Days of Our Lives spoilers say Nicole will make her escape and stumble across a shocker. Will she learn the truth about EJ (James Scott)? It’s possible Nicole will take the secret to the grave thanks to an alarming explosion. DOOL’s fall promo let us know one of those is coming up.

Of course, explosions are handy for presumed deaths. Nicole wouldn’t be dead-dead – if there’s even such a thing on Days! At this point, just about anybody can be resurrected. Heart-less, braindead Daniel (Shawn Christian) could probably make a comeback if they wanted him to. Where there’s a will, there’s a way!

However, there’s another option to consider. Xander’s return isn’t permanent either, so there’s a chance he could be killed off. Again, Days wouldn’t let that death stick. You can’t keep a good villain down, especially one as charming as Xander. DOOL viewers love the guy, so there’s no way he’ll be written out forever. Still, the show could go for the drama of a death and undo it later.

Days of Our Lives spoilers say Kristen (Stacy Haiduk) might be a longshot demise candidate, but we wouldn’t bet on it. They’ve already done the presumed death route with her. The same goes for EJ (last played by James Scott) since DOOL’s been building to his return for years.

Nicole or Xander seem like the best death possibilities. There’s no guarantee either one of them will die, but fans should brace themselves just in case. We’ll give you updates as other Days news comes in. Stay tuned to DOOL and don’t forget to check CDL often for the latest Days of Our Lives spoilers, updates and news.