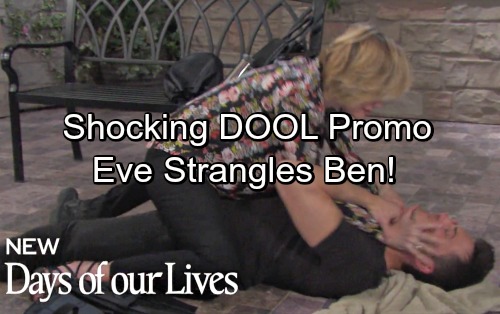 Days of Our Lives (DOOL) spoilers for the week of July 23-27 tease that Ben (Robert Scott Wilson) will be released from the Salem PD. After Ciara (Victoria Konefal) hires Ted (Gilles Marini), it won’t be long until this mess is cleared up. Ted will infuriate Kate (Lauren Koslow) by taking the case, but her criticism won’t stop him. He’ll make sure Ben’s given fair treatment during this investigation.

The fire marshal suggested that the fire was set intentionally, but Hope (Kristian Alfonso) and Rafe (Galen Gering) can’t prove Ben did it. Ted may score Ben’s release due to the flimsy evidence. Rafe and Hope could always come for him again if they score something incriminating, but it doesn’t look like they will. Ben truly appears to be innocent, so he may get off the hook soon.

Whatever the case, Ben will be able to roam about town later this week. Despite Ben’s claims of being a changed man, nobody will be rolling out the welcome mat. Ben still murdered innocent people. He can’t escape his dark past, so he’ll feel broken and alone. Ciara is in Ben’s corner, but things are complicated thanks to her police commissioner mom and the situation with Tripp (Lucas Adams).

Days spoilers say Ben will rest on a park bench for a while. He’ll take some time to think, but Eve’s (Kassie DePaiva) arrival will break the solitude. DOOL fans can expect Eve to offer a cold stare. She’ll look in the eyes of the man who killed her daughter and eventually demand some answers.

Paige (True O’Brien) was just an innocent college student when Ben strangled her to death. She was also pretty upset with Eve at the time of the murder. They never quite got to make amends, so it made Eve’s devastation even more excruciating.

Days of Our Lives spoilers say Eve will confront Ben for killing her baby girl. She’ll want to know how he could’ve snuffed out a young life like that. Ben will start his usual “I was sick” speech, but Eve won’t care about that. As far as she’s concerned, Ben’s a beast who shouldn’t be on the streets.

Eve will shove Ben to the ground in a vengeful attack. She’ll clutch his throat and growl that he’s not leaving this park alive. Of course, Days of Our Lives spoilers say Eve won’t actually do the deed. Someone might wander by and yank her off Ben at the last second.

Then again, Eve might decide Ben simply isn’t worth it. He already robbed her of Paige, so she won’t want to kill him and end up in prison. Eve would be just robbing herself of happiness with Brady (Eric Martsolf).

Nevertheless, Eve certainly won’t offer Ben forgiveness. She’ll hope he suffers every day with the painful memories of what he’s done. We’ll give you updates as other Days news comes in. Stay tuned to the DOOL and don’t forget to check CDL often for the latest Days of Our Lives spoilers, updates and news.