BY hellodrdavis on May 20, 2018 | Comments: one comment
Related : Days of Our Lives, Soap Opera, Spoiler, Television 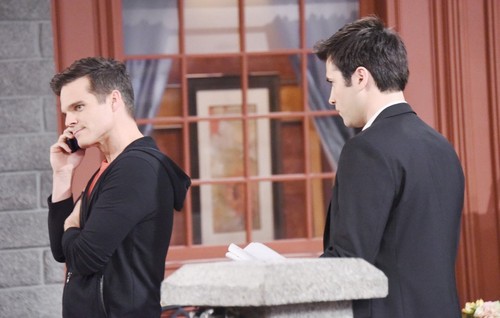 Days of Our Lives (DOOL) spoilers tease that Sonny (Freddie Smith) is in for a big surprise, and not in a good way. He’s about to have some shocking sexual harassment allegations leveled against him by Leo (Greg Rikaart), his assistant at Titan Industries.

Before her death, Vivian (Louise Sorel) hired Leo to start laying the groundwork for a sexual harassment lawsuit against Sonny and Titan. The goal? Destroy Titan and, in doing so, hurt her nemesis Victor (John Aniston). Leo got Sonny into bed, then revealed he had taken a position as Sonny’s assistant. But Sonny broke off the relationship on the grounds that it was inappropriate for the two to be romantically involved if they worked together.

After Vivian died, Kate (Lauren Koslow) took the plan over (Kate hates Victor, too) and had Leo take things to a whole new level. He kept after Sonny and finally Sonny gave in and the two made love, right there in Sonny’s office. Little did Sonny know that Leo had videotaped the encounter and planted suggestive “sexts” on Sonny’s phone! Days spoilers say that Sonny will soon realize that he’s been conned by Leo. But Leo’s already got what he needs to claim sexual harassment with his “evidence.”

Sonny’s surely going to feel devastated, not to mention humiliated, by the allegations and x-rated evidence. And Victor is bound to be furious with Sonny for using such poor judgment, embarrassing himself, and embarrassing Titan. After all, these are the kinds of allegations that can destroy a company’s business and reputation permanently!

Will Victor stand by Sonny, or will he oust him from Titan? Knowing Victor’s temper, Sonny may be out of a job pronto. If so, will Victor give the reigns back to Brady (Eric Martsolf)? Victor isn’t Brady’s biggest fan right now since Brady proposed to Eve (Kassie DePaiva), so Victor may not want to offer the position to him. Would Victor even consider his nephew Xander (Paul Telfer), who is now back in Salem with Theresa (Jen Lilley)?

How will Titan survive these explosive allegations and the lawsuit to come? Stay tuned to DOOL and don’t forget to check CDL often for the latest Days of Our Lives spoilers, updates, and news.