Days of Our Lives Spoilers: Stacy Haiduk Confirmed as Kristen Recast – Eileen Davidson’s Out at Y&R, But DOOL Role’s Taken

BY Heather Hughes on June 27, 2018 | Comments: 3 comments
Related : Days of Our Lives, Hot News, Soap Opera, Spoiler, Television, The Young and the Restless 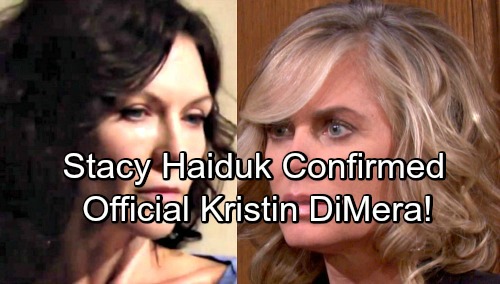 Days of Our Lives (DOOL) spoilers tease that the buzz about a Kristen DiMera recast is true. Some leaked info surfaced a while back about Stacy Haiduk filling in for Eileen Davidson. Since Davidson was busy playing Ashley Abbott on The Young and the Restless, she couldn’t work out a return stint Days.

Davidson has been able to do both shows in the past, but it seems her schedule wouldn’t allow this time. Haiduk, who’s best known for her role as crazy Patty Williams on Y&R, was a natural substitute. Unfortunately, a shocking development makes the official recast news a bit disappointing.

Daytime Confidential recently revealed that Eileen Davidson has decided to leave The Young and the Restless. Since Days fans immediately started calling for Davidson’s return as Kristen, DC confirmed that Haiduk is already playing the part. It sounds like Haiduk signed on for an extended stint and is still taping. Sources say Haiduk’s “killing it,” so DOOL may not have plans to move her out just yet.

It’s a shame this Kristen comeback couldn’t have been delayed, but that’s just how it goes sometimes. Days of Our Lives films several months in advance, so they had to plan ahead for fall and winter drama. Still, most Days viewers would agree that Davidson is preferable. No matter how good Haiduk is in the role, it’s just not going to be the same.

Could Days shift gears at some point? There’s no word on how much time is left in Haiduk’s contract. Maybe another casting change could happen sooner or later. Davidson would certainly be welcomed back with open arms. Days of Our Lives fans absolutely love her as Kristen, so we could all be patient.

Some viewers have suggested that Davidson could play a new part, but that might be tough to accept. That’s especially true when Kristen’s still running amok. Besides, Davidson may not even be interested in returning to Days. She’s reportedly leaving Y&R to spend more time with her family after not getting a raise, so she might take a break from soaps entirely.

Whatever the case, at least Kristen will be shaking up Salem in some form! DOOL watchers are anxious to see Stacy Haiduk’s version of the character. We’ll give you updates as other Days details emerge. Stay tuned to the NBC soap and don’t forget to check CDL often for the latest Days of Our Lives spoilers, updates and news.