The Young and the Restless Spoilers: Eileen Davidson Out as Ashley – Another Huge Star Quits Y&R 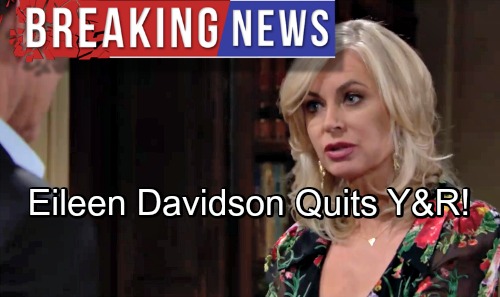 The Young and the Restless (Y&R) spoilers tease that another major departure’s looming. Eileen Davidson has decided to leave her role as Ashley on Y&R according to a reliable source. This news couldn’t come at a worse time! Mishael Morgan is already on her way out as Hilary, so the CBS soap is losing two female powerhouses. Saying goodbye to so much talent is going to be tough.

Hilary might be a recast candidate at some point, but Ashley will likely just be sent off screen. Perhaps she’ll leave town to head up a business division somewhere. This should be a real blow since we’re in the midst of Abbott family chaos. Dina’s (Marla Adams) still battling Alzheimer’s and Jack (Peter Bergman) doesn’t have proof on his biological father yet.

There’s a good chance some twists will reveal Jack is John’s (Jerry Douglas) son after all. Unless The Young and the Restless really kicks this plot in gear, Ashley may not be around for that revelation. As for Dina, she’s probably not dying anytime soon. Dina certainly has some mental struggles, but she’s got a long way to go in her decline.

Mal Young, Y&R’s head writer and executive producer, seems to want Dina around for as long as possible. However, Dina will inevitably pass away one day. Let’s hope Eileen Davidson can pop in for a return stint. It wouldn’t be believable if Ashley missed her mother’s funeral.

Of course, that may not be possible if another soap snatches Davidson up! She reportedly wants to spend more time with her family, but jumping to another daytime drama could be tempting. If the price is right and the story’s stellar, Davidson might sign on the dotted line somewhere.

Days of Our Lives fans would be happy to see Davidson return as Kristen, but there’s a bit of a problem. The role’s already been filled by Stacy Haiduk and it appears she’s still filming. If Haiduk’s contact is up soon, maybe Davidson could slide back in for a Salem comeback.

Then again, General Hospital loves to snatch up people from other soaps. They most recently scored Elizabeth Hendrickson (GH’s Margaux), who used to play Chloe on Y&R. Perhaps Davidson could be next! Daytime Confidential offers a quote with their breaking news: “Eileen is a big family person, but Sony’s ‘no raises’ policy makes it easier for actors to walk away these days;” so it’s clear that The Young and the Restless is at risk to lose more stars unless policy changes.