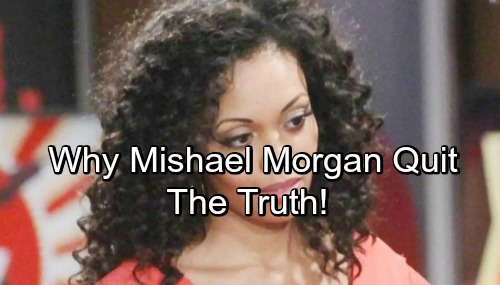 The Young and the Restless (Y&R) spoilers tease that fans are bracing themselves for a difficult departure. You’ve probably heard that Mishael Morgan is exiting the role of Hilary, but the details have been a bit hazy up to now. We know contract negotiations broke down, but what’s the real story behind Morgan’s Y&R exit? Her agent’s finally talking, so let’s consider how it all went south.

TV Source recently spoke with David Ritchie, Morgan’s manager and owner of Ambition Talent. He had a lot to say about Morgan’s decision to leave the show. Although she technically made the choice, Ritchie insists it wasn’t that simple.

There are plenty of factors in contract negotiations, like episode counts and time off for other projects. However, the most important factor is obviously money. Soap stars want to be paid what they’re worth, especially when they portray popular characters with substantial storylines. Despite Morgan’s fantastic contributions, she wasn’t offered a pay increase at all.

“It all starts with finances essentially, and they were not prepared to give her a raise. So, it would mean that she worked for five years with no increase,” Ritchie said. Morgan accepted the same offer during her previous contract negotiation, but she wasn’t down for signing a third contract unless they sweetened the pot. That’s understandable since she’s become such an important part of the show.

Since The Young and the Restless has to coordinate with Sony on this, it made for a frustrating experience. Ritchie noted that he was surprised by how things played out. He said, “It shocked me, to say the least…I was very disappointed that they didn’t even come back to the table.”

On the bright side, Ritchie indicated that Morgan’s thrilled about all the support she’s received. “The outpouring from the fans has been phenomenal,” Ritchie said. “Mishael has been overwhelmed with just how much they adore her and treat her.”

As for the chances of Morgan returning to the show, Ritchie certainly doesn’t rule it out. The right deal could make it happen. “I am always willing to take a person’s phone call,” Ritchie said. “I would say that we parted ways amicably. So yes, I would take any calls that were made.”