BY Heather Hughes on June 26, 2018 | Comments: one comment
Related : Soap Opera, Spoiler, Television, The Young and the Restless 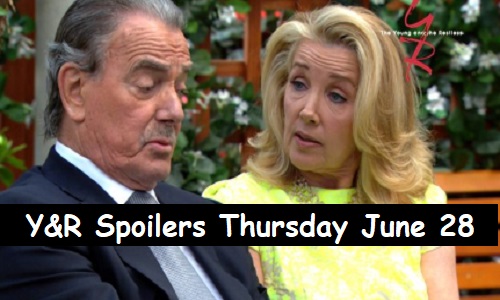 The Young and the Restless (Y&R) spoilers for Thursday, June 28, tease that Victor’s (Eric Braeden) fears will grow stronger. In Wednesday’s episode, Newman releases an article to offset the expose damage. The idea is to shut down all the illness talk and present Victor as a capable leader. Alas, it looks like that plan will fail miserably.

Victor and his company will still be in deep trouble on Thursday. The Young and the Restless spoilers hint that another blow may be dealt. As the situation spirals out of control, Neil (Kristoff St. John) will be summoned to handle the growing crisis. He’ll do his best to advise Victor and help him get past the madness. It won’t be easy since Vic’s enemy keeps striking.

Victor will eventually decide to take matters into his own hands. Y&R fans can expect a public statement in Thursday’s episode. Victor might contact Hilary (Mishael Morgan) and ask for her cooperation on this. Whatever the case, Vic will indeed find himself raging in front of a camera soon.

The Young and the Restless spoilers say Victor will badmouth his former employee on live TV. He’ll completely trash J.T. (Thad Luckinbill) and suggest that his adversary’s a coward. Since J.T. refuses to show his face and risk jail time, Victor will vow to hunt him down. He’ll get incredibly agitated as he rants about making J.T. pay the price.

Of course, Y&R viewers know that Nikki (Melody Thomas Scott) killed J.T. to save Victoria (Amelia Heinle). Phyllis (Gina Tognoni) and Sharon (Sharon Case) helped them cover it up, so J.T.’s dead and buried as far as they know. The Young and the Restless must be planning a major twist here. Either J.T.’s alive after all or someone else is posing as him for this shocking scheme.

Regardless, Victor’s announcement could lead to more drama. Despite his claims, his health seems to be quite fragile. Will Victor’s intense meltdown cause a stunning collapse? Nobody should rule it out! Over with Summer (Hunter King), she’ll pull Billy (Jason Thompson) back into chaos. Through a series of risky bets, Summer will nearly gamble away her entire inheritance.