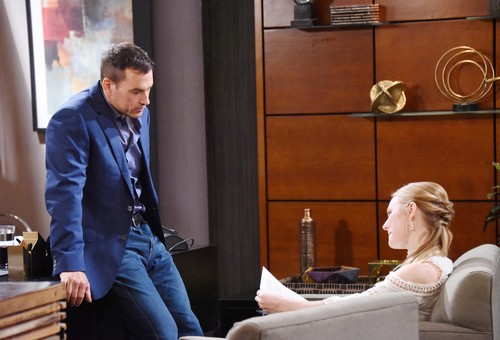 Days of Our Lives (DOOL) spoilers tease that Stefan (Tyler Christopher) and Abigail (Marci Miller) will have another sexy encounter. Since Stefan opened the door without his clothes on, he’s obviously not shy. Abigail will be uncomfortable as they wrap up their conversation, but she’ll turn the tables a bit later.

Two can play at that game! When Stefan drops by Abby’s room, she’ll choose a slightly more modest version of his tactic. Days of Our Lives spoilers say Abigail won’t bother putting on a robe or an outfit. She’ll answer the door in a towel, which will score her a smile from Stefan. 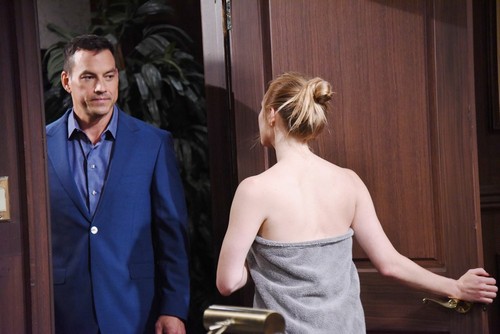 This is great news since Chad (Billy Flynn) and Abigail need Stefan to trust them. It’ll make their plan to drive him away much easier. If Abigail has to do a little flirting to make it happen, then so be it. She’ll think it’s a small price to pay to get what she wants.

However, Abigail may be playing a dangerous game. When it comes to matters of the heart, it’s not a good idea to mess with someone’s emotions. That’s especially true with a guy like Stefan. He’s the kind of person who will stop at nothing to achieve his goals. Whether Stefan battles growing feelings or just plain lust, he’ll become increasingly obsessed with Abigail.

Days spoilers state that a heated confrontation’s coming up for “Chabby.” After Abigail faces off with Chad, she’ll get suspicious of how it started. Abby will feel like Stefan intentionally played them against each other. She’ll call Stefan out on the relationship sabotage and demand to know if it’s true.

If Stefan is really to blame, he probably won’t admit it. He’ll just spin a tale of how it’s not his fault Chad and Abigail fight. DOOL fans are beginning to wonder if Stefan has any morals at all, but he undoubtedly has a soft spot. It’ll just take some time for everyone to see it.

Abigail may warm up to Stefan eventually, but she’ll focus on her anger for now. She’ll unleash her wrath during the week of January 15-19. Days of Our Lives spoilers say Abigail will set Stefan straight about who she loves and how solid their future is.

Afterward, Abigail will do her best to smooth things over with Chad. It’s possible Vivian (Louise Sorel) will have a hand in some of their marital drama. She’ll be doing more scheming pretty soon. Still, Chad and Abigail may think they can use the crumbling relationship angle to their advantage. Will they fake a failing marriage or even a breakup? That might be a fun twist for Days to pursue.

It sounds like some excitement’s coming up on the NBC soap. We’ll give you updates as other details emerge. Stick with DOOL and don’t forget to check CDL often for the latest Days of Our Lives spoilers, updates and news.