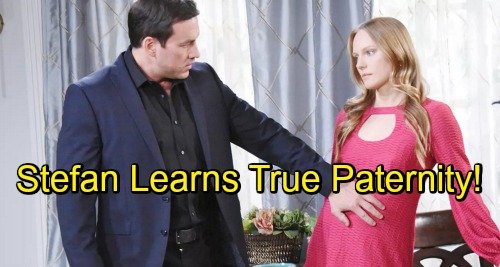 Days of Our Lives (DOOL) spoilers tease that Kayla (Mary Beth Evans) will find herself stuck in Stefan (Tyler Christopher) drama. She should’ve known her deal would come back to haunt her. Kayla hoped to do Stefan’s dirty work, get Steve’s (Stephen Nichols) sight back and be done with it. Unfortunately, Stefan’s demanding more. He’s willing to do whatever it takes to stay in the loop on his child.

DOOL fans know Stefan’s the reason Steve’s vision was restored. He owns the company that offered the bionic eye technology, so Kayla had no choice but to work with him. Steve’s still in the dark on that, but perhaps not for long. Days of Our Lives spoilers say he’ll do some digging over the next couple weeks, which could leave Kayla’s secret in jeopardy.

However, the more pressing issue is Stefan’s latest round of blackmail. He could somehow take Steve’s sight back if Kayla doesn’t cooperate. That’s why Kayla will suck it up and deliver Abigail’s (Marci Miller) medical records next week. She won’t like the idea of betraying Abby and handing over info illegally, but she’ll be willing to do it. Kayla loves Steve too much to blind him all over again.

Of course, this presents an interesting opportunity. It’s a way to stretch out Kayla and Stefan’s partnership, but that may not be Days’ main goal. The fact that Stefan will have Abigail’s medical info could be significant. He’ll be getting updates on her ultrasounds and any other baby developments as well. That could be another crucial piece of the puzzle – the paternity puzzle to be exact!

Right now, only Gabi (Camila Banus) and Kate (Lauren Koslow) know Chad (Billy Flynn) is the father. Thanks to Gabi’s dirt, Kate won’t be blabbing anytime soon. She’s not a big “Chabby” supporter anyway, so she’ll be on board with Chad and Abigail’s breakup. Kate probably won’t see any reason to confess and put them back together.

Gabi’s still on a mission for revenge, so she’ll also stay silent. That means Days will need another tactic to expose the secret. Shockers like this tend to trickle out to all the wrong people. Maybe Stefan will be the next person to uncover the truth.

Since Stefan will have access to so much medical info, it’s possible he’ll notice a peculiar discrepancy. There could be some little detail that doesn’t add up. Upon further investigation, Stefan could realize that this isn’t his baby after all. Another paternity test could confirm that and leave Stefan with a choice.

Days of Our Lives viewers can guess that choice would be! Stefan’s a scoundrel who’s obsessed with Abigail, so there’s pretty much no chance he’d come clean. He’d inevitably keep the secret and add to Abigail’s fury down the road.

Do you think Stefan will uncover the paternity bombshell? Will he realize Abigail’s carrying Chad’s baby and lie about it? We’ll keep you posted as other Days news comes in. Stick with DOOL and don’t forget to check CDL often for the latest Days of Our Lives spoilers, updates and news.