Days of Our Lives Spoilers: Stefan’s Vicious Takedown – Roman Teams Up with Kate for DiMera’s Destruction 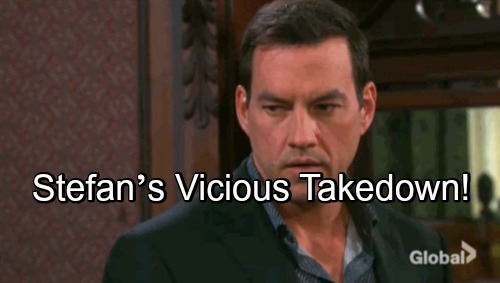 Days of Our Lives (DOOL) spoilers tease that Kate (Lauren Koslow) will get fed up with Stefan’s (Tyler Christopher) ruthlessness. She can be just as ruthless at times, but she’ll still want Stefan out of the picture. Kate was blackmailed into handing over insider info that could hurt Chad (Billy Flynn). Since Gabi (Camila Banus) found out, now Kate’s being forced to help with her sneaky strategy.

Of course, Kate thinks Gabi’s a better match for Chad than Abigail (Marci Miller). For that reason, it wasn’t too hard to get her on board. However, Kate would love to get Stefan off her back for good. He’s done nothing but cause pain and destruction since he hit town.

Gabi’s revenge plot will make Stefan suffer down the road, but that’s not good enough. Kate will want Stefan to pay a much steeper price. She’d prefer to rush his takedown along as well. Days of Our Lives spoilers say Kate will find a surprising partner for this mission. She’ll team up with Roman (Josh Taylor) on October 5, so some intriguing developments are brewing.

Stefan caused plenty of turmoil for Steve (Stephen Nichols) and Kayla (Mary Beth Evans). In fact, Kayla suspects Stefan’s the reason her hubby’s in jail. Roman has vowed to help Kayla and this may be one way he’ll do it. Days of Our Lives spoilers say Roman and Kate will join forces for a scheme to remember!

With Roman backing Kate up, Stefan may never see her coming. Kate will definitely be eager to get the ball rolling, but Roman might offer a warning. They have to play it cool and make sure all the preparations have been made. They don’t want to tip Stefan off to trouble and blow their whole plan.

Days spoilers hint that Kate and Roman will bicker throughout the process. That’s just part of the fun! It’s worth mentioning that Roman and Kate are former flames. Many DOOL fans would be open to the idea of a “Kaman” reunion. Perhaps working together could renew their spark and lead to love again.

Ted (Gilles Marini) is headed back to Days this fall, so the timing would be perfect. Despite their issues, Ted and Kate might still have a connection. He could at least be hung up on her and cause issues in her new romance.

It sounds like some great scenes are in the works, so stay tuned. We’ll give you updates as other news comes in. Stick with DOOL and don’t forget to check CDL often for the latest Days of Our Lives spoilers, updates and news.