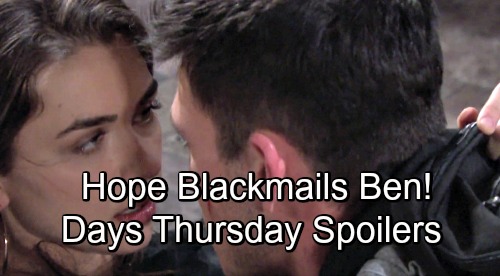 Days of Our Lives (DOOL) spoilers for Thursday, August 9, tease that Steve (Stephen Nichols) will turn to John (Drake Hogestyn) for advice. He recently overheard something surprising, so he’ll want to know what John thinks about it. Steve now realizes Kayla (Mary Beth Evans) is keeping a huge secret from him. She normally doesn’t hide things from him, so he’ll feel a bit in over his head.

John will understand that this is tough, but he may suggest it’s not as bad as Steve thinks. Regardless, Steve won’t know for sure unless he talks to Kayla and clears the air. John will urge Steve to trust that there’s a good reason for Kayla’s actions. He’ll believe they can work this out with honest communication.

Days of Our Lives spoilers say Steve will try this John’s way next week, but that plan won’t pan out. Kayla will spin a story that Steve doesn’t quite accept. If he wants the truth, he’ll have to do a little investigating. Kayla and Stefan’s (Tyler Christopher) top-secret deal is on the verge of exposure!

Days of Our Lives spoilers say Abigail will try to explain, but it’ll be futile. Chad will decide he’s done, so he’ll announce that he’s moving out of the house. Abigail will fear that they’re over for good, but we can’t forget that Gabi’s (Camila Banus) manipulating them. Let’s hope Chad and Abigail can make up once the true paternity comes out.

In the meantime, Days spoilers say Hope (Kristian Alfonso) will deliver a harsh ultimatum. She’ll tell Ben (Robert Scott Wilson) that he’s got two options here. If Ben leaves town, the fire investigation goes away and he’s officially off the hook. If he chooses to stay, the cops could pin this on Ben and have him sent back to the sanitarium.

Ben will be tempted to take off, but Ciara (Victoria Konefal) will try to change his mind later this week. You can bet she’ll succeed eventually! We’ll give you updates as other Days news comes in. Stay tuned to DOOL and don’t forget to check CDL often for the latest Days of Our Lives spoilers, updates and news.