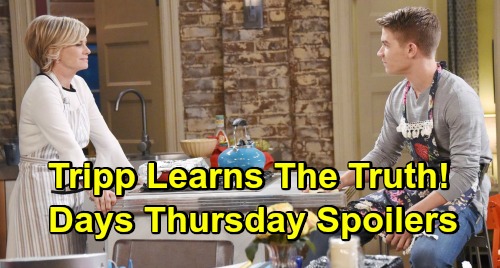 Days of Our Lives (DOOL) spoilers for Thursday, December 13, tease that Eric (Greg Vaughan) will be on cloud nine. He’s thrilled that Maggie (Suzanne Rogers) finally agreed to let him raise Holly and he owes it all to Sarah (Linsey Godfrey). She stepped up for Eric and fought for him to be Holly’s dad. Sarah can tell that Eric and Holly belong together, so she’s just glad it all worked out.

Of course, Eric and Sarah aren’t in the loop on the latest developments. While they celebrate, Maggie will mull over Chloe (Nadia Bjorlin) and Brady’s (Eric Martsolf) updates. She’ll decide that if Chloe’s willing to raise Holly, she can’t hand the kid over to Eric. Maggie will feel like Nicole’s (Arianne Zucker) original choice makes more sense, so she’ll change her mind about giving Eric custody.

It won’t be long until Eric hears the news and blasts all the key players here. He won’t understand why Chloe, Brady and Maggie are so against honoring Nicole’s last wishes. Nicole wrote that letter when she thought Eric couldn’t be in the picture, so Eric will argue that it wasn’t what she wanted.

Meanwhile, Victor (John Aniston) will burst in on Leo (Greg Rikaart) and Sonny’s (Freddie Smith) wedding. Days of Our Lives spoilers say Vic will want to shut this down immediately. Leo went after Sonny and attacked Titan with that sexual harassment lawsuit. Victor just won’t get why Sonny would ever marry this scum, but he doesn’t know that scum’s got serious leverage!

Days spoilers state that Sonny will explain the situation to Victor. He’ll fill him in on Leo’s blackmail and make Victor see that these nuptials have to happen. Victor won’t stand in the way, so Leo and Sonny will become husbands in Thursday’s DOOL episode.

Other Days of Our Lives spoilers say Kayla (Mary Beth Evans) will have a tough chat with Tripp (Lucas Adams). She’ll spill the whole story about Steve’s (Stephen Nichols) charges, her Stefan (Tyler Christopher) accusations and the predicament their family’s facing. Tripp will comfort Kayla in her time of need and insist that they have to stick together. That’s exactly what Steve would want right now.

It sounds like some gripping scenes are coming up. We’ll keep you posted as other Days details emerge. Stay tuned to DOOL and don’t forget to check CDL often for the latest Days of Our Lives spoilers, updates and news.