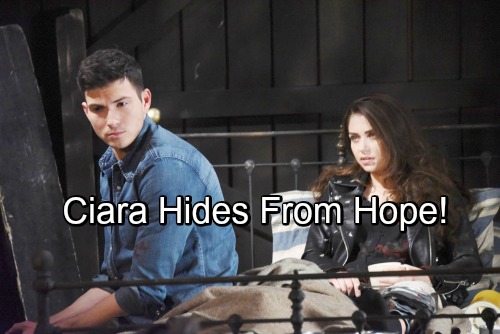 Days of Our Lives (DOOL) spoilers for Thursday, June 21, tease that Hope’s (Kristian Alfonso) relief will turn to anger and confusion. She was stunned when Ciara (Victoria Konefal) finally got in touch with her. Hope’s happy to hear her daughter’s voice, but she still needs answers. She’ll push Ciara to tell her where she’s at and who she’s with.

Unfortunately, Ciara will stay tight-lipped on the details. She’ll assure Hope that she’s safe, but she won’t reveal her whereabouts. Ciara will also leave Ben’s (Robert Scott Wilson) name out of the conversation. She won’t want Hope to freak out or target Ben in any way.

Days spoilers say Hope will just want Ciara to come home. She’ll resort to begging, but it’ll be futile. There’s a good chance Ciara will simply tell her mom she loves her and hang up. Meanwhile, Chad (Billy Flynn) will have an important chat with Victor (John Aniston). After getting Sonny’s (Freddie Smith) approval, Chad will urge Victor to let him take over at Titan.

Victor will wonder if Chad’s got what it takes. DOOL fans know he’s careful about who he lets run his company. Victor may suggest that Chad’s a bit too soft, but that’s not quite the case anymore. During his discussion with Sonny, Chad hinted that he should try to be more like a true DiMera. He’s tired of letting people like Ben and Stefan (Tyler Christopher) walk all over him.

Chad might think he can be the ruthless leader Titan needs. Regardless, it looks like Chad will score the job. Over with Steve (Stephen Nichols), he’ll have a run-in with an enemy. Days of Our Lives spoilers state that Steve will face off with Stefan. He’ll bring up everything that happened with Abigail (Marci Miller) and insist that Stefan should stay away from his family.

Of course, Steve doesn’t know what his own wife’s up to. Kayla’s (Mary Beth Evans) working with Stefan on a mission to take Kate (Lauren Koslow) down. In exchange, Kayla hopes to get a bionic eye for Steve. She’ll make progress by digging around Kate’s room on Thursday, but Will’s (Chandler Massey) arrival will throw her for a loop. Days viewers can expect some jittery moments.

It sounds like Kayla will have to explain her snooping. She’ll probably come up with a decent excuse and hightail it out of there! We’ll give you updates as other Days of Our Lives news comes in. Stick with DOOL and don’t forget to check CDL often for the latest Days of Our Lives spoilers, updates and news.