Days of Our Lives Spoilers: Tripp Rages as Ciara Moves on with Ben – Starts Risky War as Heartbreak Hits Hard 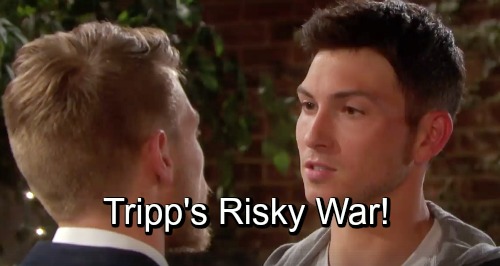 Days of Our Lives (DOOL) spoilers tease that Ciara (Victoria Konefal) will be on an emotional roller coaster soon. Her heart undoubtedly fluttered over Ben’s (Robert Scott Wilson) recent admission, but she shut down any thoughts of a future with him. Ciara’s attempting to focus on her commitment to Tripp (Lucas Adams). She thinks he’s the ideal option for her, but a shocker will derail their romance.

Once Ciara finds out Tripp framed Ben for arson, she’ll hit the roof. Ben’s been trying so hard to be a better person. Ciara acknowledges and respects that, so she’ll be furious over Tripp’s sabotage. She may feel like she doesn’t really know him at all.

Tripp should apologize, but he’ll also find a way to justify his actions. He’ll insist that he truly thought Ben was guilty. Tripp may be sorry for how he went about it, but he won’t be sorry he tried to protect Ciara. He’ll argue that he only wanted what was best for her. Naturally, Tripp thinks that’s him.

Days of Our Lives spoilers say Tripp will want to sort through their problems. He’ll believe they can work things out, but Ciara won’t be on board. After she dumps Tripp, it won’t take Ciara long to move on. She’ll finally have the excuse she needs to accept her feelings for Ben. DOOL fans can expect her to do just that next week.

Ciara will stop fighting the love she feels, so she’ll likely go to Ben and profess it. She’ll want him to know she can sense the same powerful spark. Days of Our Lives spoilers say a kiss is coming up for Ben and Ciara. Once their lips collide, it should rev up those feelings they’ve been dealing with. Ciara and Ben definitely have some intense chemistry!

Days spoilers state that Tripp will be livid over Ciara’s decision. He’ll try to start a war with Ben, which isn’t a good idea! Tripp’s just lucky Ben isn’t a total psycho anymore. It’s clear that Ben could beat just about any Salemite to a pulp!

Thanksgiving is coming up, so will Ciara’s love life come up at the family gathering? Will Hope (Kristian Alfonso), Rafe (Galen Gering) and Ciara’s over protective relatives cause trouble? We’ll give you updates as other Days news emerges. Stay tuned to DOOL and don’t forget to check CDL often for the latest Days of Our Lives spoilers, updates and news.