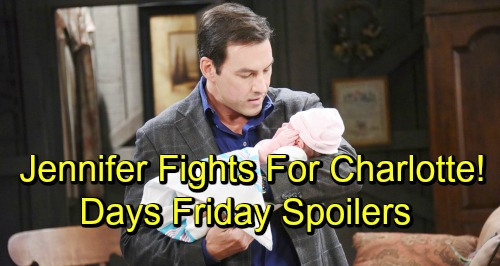 Days of Our Lives (DOOL) spoilers for Friday, November 16, tease that Claire’s (Olivia Rose Keegan) sneaky plan will fall apart. In an effort to protect Tripp (Lucas Adams), Claire paid Wyatt (Scott Shilstone) to take the fall for the arson setup. Wyatt got a slap on the twist and a ton of money. Tripp was able to maintain his innocence and preserve his relationship with Ciara (Victoria Konefal).

It seemed like a foolproof plot to Claire, but she’s about to find out she was wrong. Days of Our Lives spoilers say Ben (Robert Scott Wilson) will grow suspicious on Friday. He’ll determine that there’s more to the story, so he’ll corner Wyatt again and demand some answers. It won’t be long until Wyatt cracks under the pressure. Once Wyatt spills all, Ben will know Tripp was to blame for framing him.

Days of Our Lives spoilers say Ben will fume over his discovery. He’ll decide he has to tell Ciara immediately, so he’ll track her down and deliver the shocker. The aftermath is sure to be explosive next week! In the meantime, Days fans can expect another fierce showdown. Jennifer (Melissa Reeves) will be riled up and ready to rip into Stefan (Tyler Christopher).

Chad (Billy Flynn) felt like he had to save Abigail (Marci Miller) from herself. Thanks to Gabi (Camila Banus), Chad believes Abigail’s spiraling out of control. He couldn’t risk Abigail hurting their children, so he made a cruel deal with Stefan. That deal will infuriate Jennifer in Friday’s new DOOL episode. She’ll blast Stefan for his part in it and do her best to get her hands on the baby.

Naturally, Stefan will refuse to hand Charlotte over. Jennifer’s outrage won’t change the situation, so she’ll be even more frustrated. Elsewhere, JJ (Casey Moss) will open up to Kayla (Mary Beth Evans). He’ll talk about Gabi’s feud with Abigail and the role that’s played in his sister’s struggles. JJ will feel torn about what’s real and what’s not, so he’ll need Kayla’s words of wisdom.

It sounds like some gripping scenes are ahead in Salem. We’ll give you updates as other Days news comes in. Stay tuned to DOOL and don’t forget to check CDL often for the latest Days of Our Lives spoilers, updates and news.