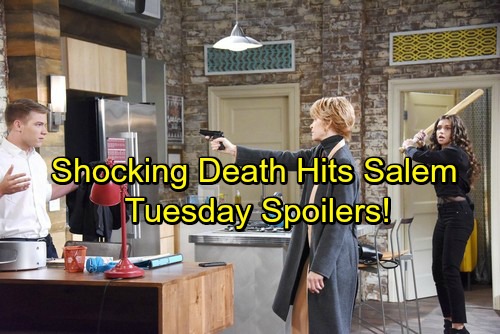 Days of Our Lives (DOOL) spoilers for Tuesday, February 20, tease that Tripp (Lucas Adams) and Ciara (Victoria Konefal) will face extreme danger. Pamela Van Damme (Martha Hackett) just showed up with a gun, so the drama’s about to rev up. She’ll force the teens to leave the loft and head to an undisclosed location.

DOOL fans can expect some tense moments, especially when Kayla (Mary Beth Evans) gets the kidnapping news. She’ll decide she shouldn’t tell Steve (Stephen Nichols) what’s going on just yet. Kayla knows Steve would just jump out of bed to help and he obviously hasn’t recovered enough for that. Tripp and Ciara are going to need another hero, so maybe John will leap into action and redeem himself. 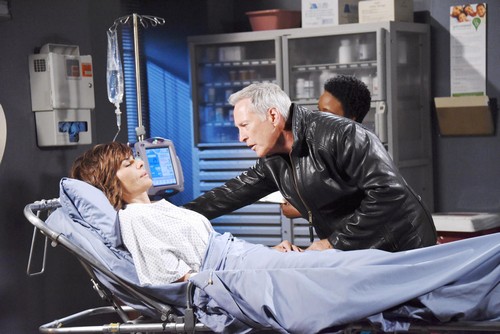 Of course, Paul’s (Christopher Sean) free now as well. It’s possible that he’ll step up for this rescue mission. Whatever the case, Days of Our Lives spoilers say this hostage situation will take a lethal turn. By the time all this is over, someone will end up dead. Since all the major characters involved here are sticking around, it sounds like Pamela may be the one who bites the dust.

Billie (Lisa Rinna), on the other hand, will pull through. She was just shot, so she’ll be rushed to the hospital in Tuesday’s episode. John will hate to see Billie in pain, but at least she’ll survive. That’s something to be grateful for! Billie won’t blame John for this mess, but Kate (Lauren Koslow) still blast him later this week. 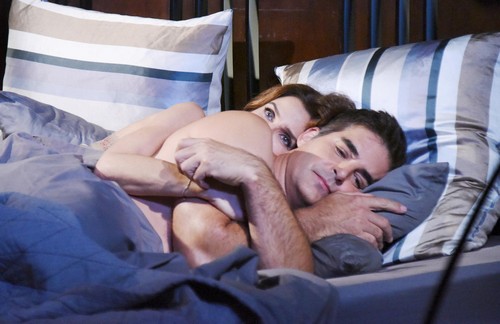 Other Days of Our Lives spoilers state that Rafe (Galen Gering) and Hope (Kristian Alfonso) will enjoy an evening of romance. They’re less than a month away from their nuptials, so they’re really over the moon. However, Rafe has some fears in the back of his mind. He can’t stop worrying about his hookup with Sami (Alison Sweeney). If Hope ever found out, she’d be devastated.

Rafe will continue his efforts to keep the secret, but it’ll all blow up down the road. Days spoilers suggest that bomb may drop the night before the wedding. DOOL has given some hints that point in that direction, so stay tuned.

It looks like Days has some great scenes in store. We’ll give you updates as other details emerge. Stick with the NBC soap and don’t forget to check CDL often for the latest Days of Our Lives spoilers, updates and news.