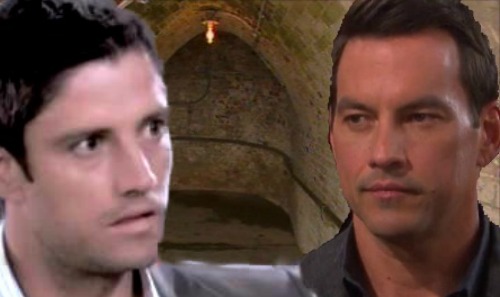 Days of Our Lives (DOOL) spoilers tease that Sami (Alison Sweeney) will be on a fierce mission next week. She got sidetracked by Marlena’s (Deidre Hall) deadly drama, but she’s undoubtedly kept EJ (James Scott) in the back of her mind. Sami thought the love of her life was gone forever, but Kristen (Stacy Haiduk) suggested that wasn’t the case.

Once Sami is released from police custody, she can continue her quest for answers. Days spoilers say Sami will head straight over to the DiMera mansion. She’ll end up in a risky situation after she arrives, so Kristen may have a trick or two up her sleeve. Nevertheless, Sami won’t let anything scare her off. She’ll be determined to track EJ down and finally get the reunion she’s been waiting for.

However, Sami won’t be the only one who’s curious about EJ’s whereabouts. Stefan (Tyler Christopher) will also have questions about his brother. He knows Kristen can be manipulative – as any good DiMera should be! As a result, Stefan will assume Kristen could be lying about EJ’s survival. He just won’t trust that her story’s accurate.

During the week of September 24-28, Days of Our Lives spoilers say Stefan will grill Kristen about her claims. He’ll push his sister to be straight with him on this. Stefan will ask if EJ’s still alive and hope for honesty in return. Kristen will likely admit that she told Sami the truth, but she probably won’t reveal all the facts. DOOL has to keep the mystery in play for a while longer!

During the remainder of Sami’s latest stint, she’ll focus on locating EJ and putting her family back together. Eric (Greg Vaughan) will tie in with that search in some surprising ways. Days of Our Lives may plan to let Sami and EJ ride off into the sunset together, but it’d be nice if EJ could stick around.

Even if EJ comes home heartbroken and single later, that’d be fine with most Days fans. Since Stefan’s so curious, they could be laying the groundwork for another brother war. Chad’s (Billy Flynn) set to exit down the road, so it’d be great if they could bring EJ back and let him battle it out with Stefan.

Would you like to see an EJ recast face off with Stefan? Could Days be cooking that up? We’ll give you updates as other news comes in. Stay tuned to DOOL and don’t forget to check CDL often for the latest Days of Our Lives spoilers, updates and news.