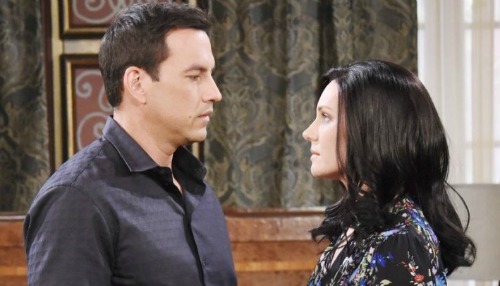 Days of Our Lives (DOOL) spoilers tease that Abigail (Marci Miller) will face a terrible dilemma. After she completes her therapy with Laura (Jaime Lyn Bauer), Abby will return to Chad (Billy Flynn) in Salem. She’ll reunite with her beloved husband, but a dark cloud will hang over this reunion. It turns out Abigail’s got a shocking secret and it could change everything for “Chabby.”

After “Gabby” slept with Stefan (Tyler Christopher), many Days fans braced for a paternity mystery. That’s exactly where DOOL’s going with this. Days of Our Lives spoilers say Abigail will hide the baby drama from Chad at first. She’ll want some time to confirm the news with a pregnancy test.

Abigail will decide to share the secret a little later, but not with Chad. Instead, she’ll open up during a close moment with Gabi (Camila Banus). Perhaps Gabi will sense that Abigail’s upset. She might push her “friend” to share what’s troubling her, but that may not be the best idea.

Days of Our Lives spoilers have been clear about Gabi’s revenge mission. She wants Stefan and Abigail to pay for what they’ve done. Gabi feels like part of Abigail must’ve wanted to destroy her life. She understands that Abigail suffered from dissociative identity disorder, but she can’t get past Abby’s subconscious desires.

To make matters worse, it seems Arianna (Harper and Sydnee Udell) will give Gabi the cold shoulder. Before Gabi’s chat with Abigail, her reunion with Ari will bring a shocker. Gabi may be surprised when Arianna doesn’t welcome her with open arms.

Plus, Gabi’s beating may play a role in the story. Word has it the violence might’ve caused permanent damage. Days buzz suggests that Gabi may not be able to have more children, so that could be a huge factor in what’s next.

When you combine Gabi’s growing grudge with Abigail’s pregnancy, there’s bound to be trouble. This seems like the prime setup for a paternity swap. Let’s face it. Days probably isn’t going to give Abigail a kid with her rapist. However, they could certainly make her think Stefan’s the father.

Gabi may alter the paternity test to blow up Abigail’s world. Since Abby would do everything in her power to keep Stefan away from the kid, it’d be hurting him as well. As for Chad, it could be payback for siding with Abigail during the DID mess. Gabi would really have the perfect plan for vengeance.

Of course, the baby could ultimately be revealed as Chad’s. A similar scenario played out after Thomas (Justin Allan) was born, so we know the drill. Will kid number two bring another round of paternity chaos? We’ll give you updates as other Days details emerge. Stick with DOOL and don’t forget to check CDL often for the latest Days of Our Lives spoilers, updates and news.