Days of Our Lives Spoilers: Victor Plants Drugs to Frame Theresa – But JJ Takes The Fall 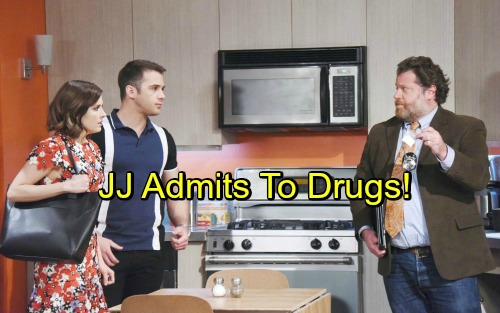 Days of Our Lives (DOOL) spoilers tease that Eve (Kassie DePaiva) will get desperate in her quest to help Brady (Eric Martsolf) win full custody of Tate (Colin and Kyle Schroeder). Theresa (Jen Lilley) has gained the upper hand in the case, and Brady’s in a real bind.

Theresa’s lawyer Ted (Gilles Marini) has basically painted Brady as a terrible influence on a child, strongly suggesting that Brady was involved in Deimos’ (Vincent Irizarry) murder. But Brady refuses to clear his name by naming the actual murderer…Nicole (Arianne Zucker).

So, Eve will feel that she has to do something drastic to help Brady win his case. Days spoilers say that Eve will enlist Victor’s (John Aniston) help, and Victor will have an associate plant drugs in JJ’s (Casey Moss) apartment. Of course, the plan is to make it look like Theresa, who is staying in JJ’s apartment, is doing drugs and is therefore an unfit mother.

But this plan will backfire terribly when JJ decides to help out Theresa by (falsely) admitting during the custody hearing that the drugs were his and that Theresa didn’t know anything about them. Of course, that’s a big lie, but it will work and Theresa will come out of the situation unscathed.

The end result of all of this is that two men’s lives will be seriously and negatively impacted. JJ is going to be in the hot seat for being in possession of drugs and will face suspension for it. And Brady is going to lose big in the custody case and will face being without his son. It’s a real shame.

Do you think JJ will ever get his EMT job back after admitting to having drugs? Stay tuned to DOOL and don’t forget to check CDL often for the latest Days of Our Lives spoilers, updates, and news.