Days of Our Lives Spoilers: War Erupts Over Abigail’s Baby – Jennifer and Stefan Fight For Custody of Newborn 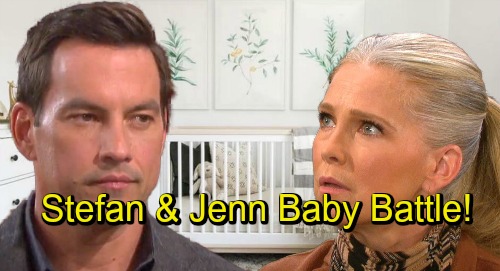 Days of Our Lives (DOOL) spoilers tease that Abigail (Marci Miller) is going to be in for a rough time after her daughter is born. It looks like Stefan (Tyler Christopher) is going to get very possessive and protective of his daughter. Of course, Stefan isn’t really the baby’s father, but thanks to Gabi (Camila Banus), everyone thinks he is.

Stefan is in an advantageous position right now. He’s married to Abigail, and there’s really nothing that can keep him from having full access to his daughter whenever he wants it. Chad really has no say in the matter, since he’s no longer Abigail’s husband and (allegedly) isn’t the baby’s father.

But it looks like Jennifer (Melissa Reeves) is going to get involved and stake a claim on Abigail’s baby. She hates Stefan and probably would like to keep the baby as far away from Stefan as possible. Days spoilers say that Jennifer and Stefan will fight over the baby.

Jennifer may argue that, as the baby’s grandmother, she should care for the baby while Abigail recovers from childbirth. But Stefan will probably have none of that. He’ll think that he has a natural and rightful claim to the baby and that the baby should be living at the DiMera mansion.

And where’s Gabi in all of this? She’ll be witnessing the fighting over the baby, and Days spoilers say she’ll wrestle with whether to come forward with the truth that the baby really belongs to Chad. But will she?

How long do you think it will take for the truth to come out that Chad’s really the baby’s father? Stay tuned to DOOL and don’t forget to check CDL often for the latest Days of Our Lives spoilers, updates, and news.