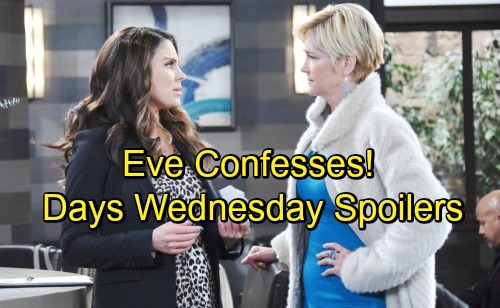 Days of Our Lives (DOOL) spoilers for Wednesday, July 18, tease that Steve (Stephen Nichols) will be a bit nervous. He’ll need the support of his loved ones as he awaits news on his surgery. Steve’s hoping he’s a good candidate for this procedure, but he knows there are no guarantees. He’ll naturally start to fear the worst, but several friends and family members will try to lift his spirits.

John (Drake Hogestyn), Marlena (Deidre Hall), Roman (Josh Taylor) and Adrienne (Judi Evans) will all rally around Steve. They’ll urge him to stay optimistic about securing his bionic eye. Fortunately, Steve will indeed get some positive updates later. He’ll find out his surgery can move forward, so he’ll be absolutely thrilled. Steve will finally be on the verge of getting his sight back! 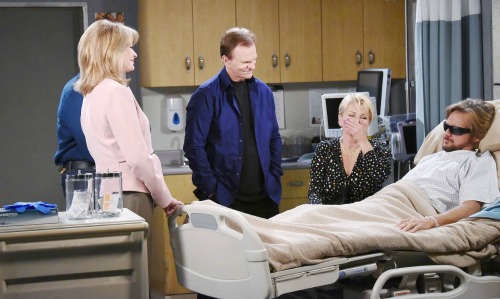 Meanwhile, Victor (John Aniston) will fume over Theresa’s (Jen Lilley) victory. He’ll find some way to retaliate, but it won’t do any good. Theresa already won the custody battle, so Victor and Eve (Kassie DePaiva) will just have to accept defeat. Of course, Days spoilers say this loss will be toughest on Brady (Eric Martsolf). He’ll definitely struggle as he adjusts to life without Tate (Colin and Kyle Schroeder).

Brady’s pain will really hit Eve hard, so she’ll decide to confide in Chloe (Nadia Bjorlin). DOOL fans know this devastation is technically Eve’s fault. If she hadn’t pushed Victor to do something drastic, Theresa wouldn’t have changed her mind about the custody agreement. 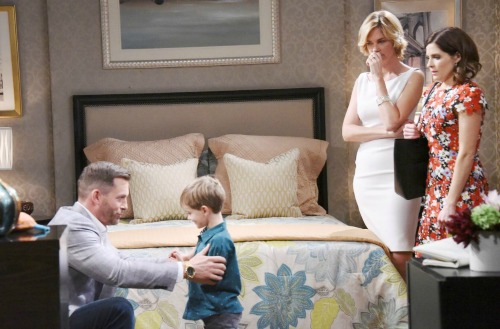 Days of Our Lives spoilers say Eve will admit the whole story to Chloe and get some advice. Will Chloe tell Eve to come clean to Brady? Will she think that’d only add to his suffering right now? Either way, Eve will undoubtedly keep her mouth shut. Her relationship is on solid ground, so Eve doesn’t want to screw things up again.

Elsewhere, Jennifer (Melissa Reeves) will be on a mission. Days of Our Lives spoilers say she’ll seek answers about the drugs found in JJ’s (Casey Moss) apartment. Jen won’t rest until she gets JJ off the hook for this mess. Her investigation will certainly bring some surprises!

It looks like the action’s about to heat up in Salem. We’ll keep you posted as other Days details emerge. Stick with DOOL and don’t forget to check CDL often for the latest Days of Our Lives spoilers, updates and news.