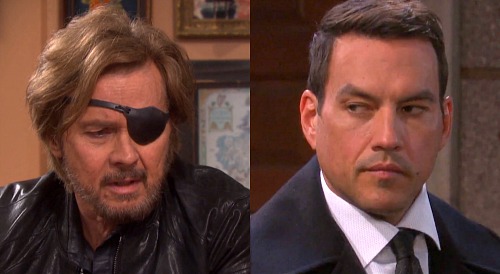 Days of Our Lives (DOOL) spoilers tease that Steve (Stephen Nichols) will do his best to cope over the next few weeks. He’ll have quite an adjustment to make after his shocking realization on Thursday. Steve will no longer be able to see anything, so that’ll present some challenges in the coming episodes.

Fortunately, Steve’s got a solid support system. Days of Our Lives spoilers say Kayla (Mary Beth Evans) and Tripp (Lucas Adams) will do their best to pitch in. They’ll let Steve know they can help with anything he needs.

Of course, Steve’s not the kind of guy who wants to rely on anyone else. He’ll have to have some assistance at first, but he’ll try to take steps toward a new form of independence. Things won’t be quite the same, but Steve will still want to be his own man. He may cope surprising well under the circumstances.

For example, Steve won’t shy away from a confrontation with Stefan (Tyler Christopher). Next week, April 2-6, Days of Our Lives spoilers say Steve will bump into the newest DiMera family member. Introductions will be exchanged and Steve will admit he’s heard some rough stuff about sneaky Stefan.

DOOL fans can expect Stefan to deny any wrongdoing as usual. He’ll undoubtedly set Steve straight about any news he might’ve received. Stefan will insist that he’s simply trying to do his job at the company and fit in with the DiMera clan.

None of that’s been easy thanks to Andre’s (Thaao Penghlis) murder and Abigail’s (Marci Miller) dissociative identity disorder. Naturally, Stefan will leave out those crucial pieces of info! Nevertheless, Steve will sense that something’s off about this guy. He won’t need his sight to tell him that.

Steve has good instincts and they certainly won’t go away due to his blindness. If anything, Steve’s intuition will become stronger. He’ll be more in tune with the vibe other characters are giving off. Days spoilers reveal that Steve will smell a rat in Stefan’s case. As a result, he’ll decide to offer a harsh warning.

Steve will be especially concerned about Abigail. He’ll want to watch out for his niece, so he’ll make it clear that Stefan should stay in line. Steve doesn’t need his sight to kick Stefan’s butt and he’ll probably tell him so!

It sounds like Stefan will really be feeling the pressure soon. We’ll give you updates as other Days details emerge. Stick with DOOL and don’t forget to check CDL often for the latest Days of Our Lives spoilers, updates and news.