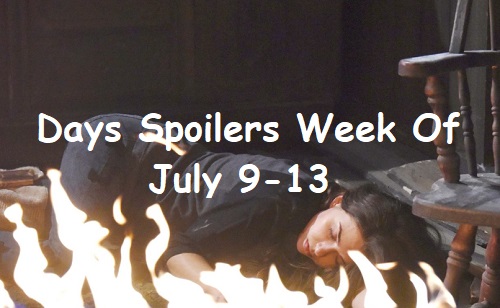 Days of Our Lives (DOOL) spoilers for the week of July 9-13 tease that several Salemites will be stuck in jams. For starters, Ciara (Victoria Konefal) will be trapped in a growing fire. She’ll eventually pass out from smoke inhalation, so Rafe (Galen Gering) and Hope (Kristian Alfonso) had better hurry!

Fortunately, Rafe will indeed burst in and save the day. He’ll pull Ciara from the blaze and make sure she’s rushed to the hospital. As for Ben (Robert Scott Wilson), he’ll return and get an earful for putting Ciara in danger. Days spoilers say Ben will deny setting the fire, but he’ll be arrested on the spot anyway.

Later, Ciara will sneak out of her hospital room and face Ben at the police station. She’ll ask him to be straight with her about what happened. Ciara will wonder if Ben led to the fiery peril, but he’ll assure her that he wasn’t behind it. Ben’s word will be enough for Ciara, so she’ll try to talk Hope into letting him go.

Meanwhile, Eve (Kassie DePaiva) will make a stunning suggestion. After Brady (Eric Martsolf) comes clean about Nicole (Arianne Zucker) murdering Deimos (Vincent Irizarry), Eve will think he has to sell his ex out. She’ll insist that Brady could lose Tate (Colin and Kyle Schroeder) if she doesn’t.

After Brady refuses, Eve will take matters into her own hands. She’ll get in touch with Victor (John Aniston) and try to work out some sort of deal. Will Eve push Victor to testify about Nicole’s actions? Will she plot some other surprise blow? Regardless, Theresa (Jen Lilley) won’t be happy about what her sister cooked up.

Victor could do some backstabbing as well, so Eve needs to be wary here. Making an agreement with Victor usually isn’t a good idea! Nevertheless, it seems Brady will gain the upper hand for a bit. That’ll spark a brave declaration from JJ (Casey Moss) at the custody hearing. He’ll put a lot at stake for Theresa’s benefit, so there’ll definitely be consequences.

Other Days of Our Lives spoilers say Gabi (Camila Banus) will face a startling medical emergency. Once Maggie (Suzanne Rogers) takes her to the hospital, Gabi will get checked out by Kayla (Mary Beth Evans). She’ll get some crushing updates, so expect some emotional moments. DOOL buzz hints that Gabi can’t have more kids, so that’ll be a tough blow to accept.

Over with Abigail (Marci Miller), she’ll prepare to read the results of her paternity test. Abby probably won’t question them, but maybe she should! Switcheroos are awfully common on Days. Across town, Kate (Lauren Koslow) and Ted (Gilles Marini) will hit the sheets. Their steamy sex session will bring them closer, but Stefan (Tyler Christopher) could cause major issues soon enough.

It looks like some action-packed episodes are coming up. We’ll keep you posted as other Days of Our Lives news emerges. Stay tuned to DOOL and don’t forget to check CDL often for the latest Days of Our Lives spoilers, updates and news.