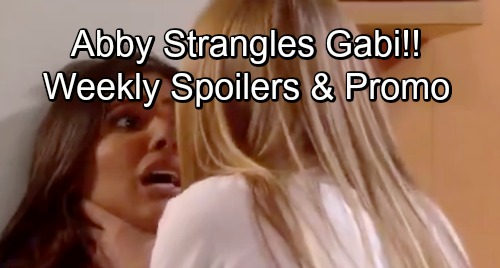 Days of Our Lives (DOOL) spoilers for the week of November 19-23 tease that some stunning moments are ahead in Salem. First, Ciara (Victoria Konefal) will stun Tripp (Lucas Adams) with the truth. She’ll admit she knows all about his plan to frame Ben (Robert Scott Wilson) for arson. Once Ciara lashes out, she’ll dump Tripp on the spot and share a tender conversation with Ben.

Ciara will drop some hints about their possible future together. Ben will pour his heart out again, but it won’t be easy for these two to make the leap. Since Ben’s a reformed serial killer and the town pariah, there’s much more drama to come.

Over with Paul (Christopher Sean), he’ll bid his family farewell and head off to San Francisco. Paul will plan to get some treatment there and spend time with his mom. Of course, he’ll also want to heal his heart. Thanks to a handsome plane companion, Paul’s love life will suddenly be looking up.

Unfortunately, Abigail’s (Marci Miller) world will be a total nightmare. She’ll be suffering at the sanitarium when Gabi (Camila Banus) arrives to gloat. Days of Our Lives spoilers say Gabi will pull out the wig she used for her plan. She’ll explain how she fooled everyone and now Abigail’s paying the price.

It won’t be long until Abigail jumps out of bed and wraps her hands around Gabi’s neck. She’ll choke her enemy briefly, but Chad’s (Billy Flynn) arrival will stop the attack. Naturally, Chad will think Abigail’s mental state is declining. He’ll order the staff to restrain Abigail, so her ordeal will get even tougher.

Other Days of Our Lives spoilers say Sheila (Tionne “T-Boz” Watkins) will get on Abe’s (James Reynolds) last nerve. She’ll be late for work, so he’ll throw a fit. Abe pretty much hates Sheila’s guts, but things will shift sooner or later. It looks like love might even be in the air down the road!

Valerie (Vanessa Williams) will get a job offer that could take her out of town, so that’d open the door for Abe’s new love story. Meanwhile, Will (Chandler Massey) will get some guidance from Marlena (Deidre Hall). She’s always great at dishing out words of wisdom. Will just split from Paul, but he also learned Sonny (Freddie Smith) left Salem. He may wonder what he should do about that.

Luckily, Will won’t have to do anything at all. Days fans can expect Sonny’s return before the week’s over. He’ll have some sweet scenes with Will as they prepare for their future together. Too bad Victor (John Aniston) will get in the way! Speaking of Victor, he’ll have a health crisis this week. Sarah (Linsey Godfrey) will step up to help, so it’s nice that DOOL is showing off this doctor’s skills.

Finally, Thanksgiving will bring some Salem shockers. Days of Our Lives viewers won’t want to miss what’s in store. We’ll give you updates as other news comes in. Stay tuned to DOOL and don’t forget to check CDL often for the latest Days of Our Lives spoilers, updates and news.