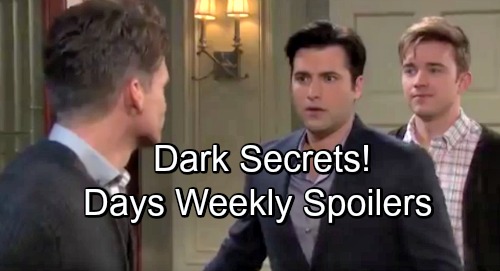 Days of Our Lives (DOOL) spoilers for the week of November 26-30 tease that some returns and shakeups will change everything. For starters, we’ll see some Leo (Greg Rikaart) drama. He’ll be back from the “dead,” but it’s doubtful any serum was needed this time around. Sonny (Freddie Smith) and Will (Chandler Massey) aren’t exactly medical experts, so they undoubtedly just got it wrong!

Unfortunately, Leo could still use this mess against them. He’ll derail their reunion this week by once again demanding a marriage. Leo’s eager to get his hands on some Kiriakis cash, so he wants Sonny to be his husband. If Sonny refuses, Leo could unleash some dark secrets and bring disasters for several Salemites.

Other Days of Our Lives spoilers say Ted (Gilles Marini) will return as well. He’ll convince Hope (Kristian Alfonso) to help him hide out from Stefan (Tyler Christopher) and Kate (Lauren Koslow), but she may end up regretting that decision. Over with Ben (Robert Scott Wilson), he’ll share some tender moments with Ciara (Victoria Konefal). They’ll do some sneaking around as they consider their feelings.

Eventually, Ciara won’t be able to deny the passion she’s grappling with. She’ll accept Ben’s kiss and wonder where they go from here. Days spoilers state that Ben will score a job this week, too. Chad (Billy Flynn) hired him for his kidnapping plot not too long ago, so Ben will return to his old DOOL foe. He may note that they made a pretty good team.

As a result, Ben will hope Chad has another way to use his talents. It turns out Chad just might! At Bayview, Abigail will be completely miserable. Kate Mansi will return to the role and come out swinging. Days of Our Lives spoilers say Chad will get an earful for putting Abigail in this terrible situation. She’ll still hold Gabi (Camila Banus) responsible, but that doesn’t mean Chad can’t get some of the blame, too.

As for Gabi, she’ll find herself on the hot seat multiple times. Both Kayla (Mary Beth Evans) and Rafe (Galen Gering) will ask some tough questions. Gabi may struggle to keep her scheme intact. Stefan will also reach out to Kayla and suggest that maybe he can help Steve (Stephen Nichols) get his freedom. He’ll claim he wants to help, but he’ll surely have some sort of agenda.

Kayla may be reluctant to get tangled up in any more of Stefan’s twisted partnerships. She might choose to rely on Roman (Josh Taylor) and anyone else she can think of. Stefan’s a dirty rotten scoundrel who just can’t be trusted!

Days spoilers say some hot episodes are coming up. We’ll give you updates as other news emerges. Stay tuned to DOOL and don’t forget to check CDL often for the latest Days of Our Lives spoilers, updates and news.