BY hellodrdavis on May 25, 2018 | Comments: one comment
Related : Days of Our Lives, Soap Opera, Spoiler, Television 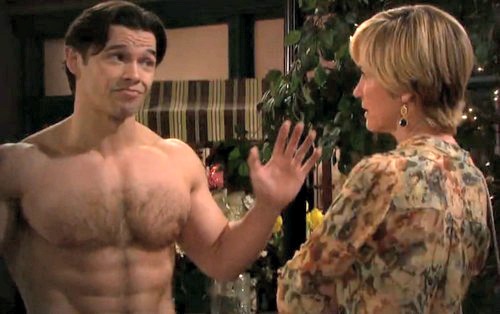 Days of Our Lives (DOOL) spoilers tease that Xander (Paul Telfer) is back to once again stir up trouble in Salem. Xander showed up on his Uncle Victor’s (John Aniston) doorstep with Theresa (Jen Lilley) in tow, having freed her from the evil Mateo (Andoni Gracia). And true to form, Xander is being his usual annoying self.

In fact, Xander is already agitating Victor with his sarcasm and biting comments. Xander and Victor have a troubled history. Victor has always been cold and distant toward him, and at one point made Xander work on the gardening crew at the Kiriakis mansion! Victor’s in a bit of a dilemma, though, because he needs to at least try to be civil to Xander since Xander brought Theresa home. We’ll see how that works out.

Xander seems set on upsetting some other Salem residents as well. Days spoilers say that Xander will taunt Jennifer (Melissa Reeves) over her relationship with Eric (Greg Vaughan). He may bring up Nicole (Arianne Zucker), which would certainly get under Jennifer’s skin and maybe rekindle her doubts about Eric’s feelings for Nicole. Xander’s no fan of Eric’s and he’d surely love to cause trouble between Eric and Jennifer.

Eric’s not going to be happy to learn that Xander’s back, and Days spoilers say that he and Xander will face off. Considering that Xander once tried to kill Eric, that conversation probably won’t go well. Eric normally isn’t one to hold a grudge, but when the guy who tried to kill you in the Titan furnace room is back and harassing your woman, things could get heated.

Chances are, Xander’s going to do some significant damage in Salem this time around. But will he at least try to walk the straight and narrow to stay in his Uncle Victor’s good graces? It looks like Victor might need some new blood at Titan when Leo’s (Greg Rikaart) sexual harassment allegations drop against Sonny (Freddie Smith), so Xander may desire an opportunity there. But chances are, he will continue his life of crime. After all, it’s what he’s good at.

What trouble will Xander cause next, and who will be his next target in Salem? Stay tuned to DOOL and don’t forget to check CDL often for the latest Days of Our Lives spoilers, updates, and news.